The archbishop of the US city of Philadelphia has resigned, months after renewed accusations that the Catholic Church covered up child sex abuse.

Cardinal Justin Rigali had submitted his resignation in April 2010 upon turning 75, but Pope Benedict XVI did not act on it until now. 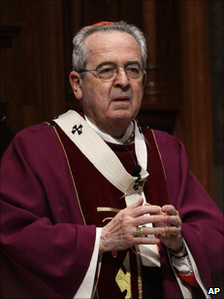 Archbishop Charles Chaput of the US city of Denver is to replace him.

US grand juries in 2005 and 2011 said the church protected abuser priests and left some in contact with children.
Time limits

Cardinal Rigali has been Philadelphia archbishop since 2003 and his retirement was expected this year, the Philadelphia Inquirer reported.

Time limits prevented that panel from bringing charges, however.

The archdiocese reacted by saying the grand jury’s report was “discriminatory” and “sensationalised” and accused investigators of “bullying” Cardinal Bevilacqua during his testimony sessions.

Then, in February 2011 a second grand jury report said at least 37 priests were kept in assignments that exposed them to children despite “substantial evidence of abuse”.

His successor, Cardinal Chaput, 66, is known as a staunch conservative and a vigorous opponent of abortion rights.

Last year he defended the decision by a Catholic school in Denver, Colorado to expel two children of a lesbian couple.