The Episcopal Church, which has been strained by gay-rights issues since the election of an openly gay bishop in New Hampshire eight years ago, is now divided over how to respond to the legalization of same-sex marriage in New York.
Related

Bishop Lawrence C. Provenzano will let priests in Brooklyn, Queens and on Long Island officiate at same-sex weddings. In some other New York dioceses, bishops will not or are undecided.

As a result, gay and lesbian Episcopalians will be allowed on Sunday to get married by priests in Brooklyn and Queens, but not in the Bronx or Manhattan or on Staten Island; in Syracuse but not in Albany.

That is because the church has not taken a firm position nationally on same-sex marriage, leaving local bishops with wide latitude to decide what priests may do when the law takes effect in New York State. In the state, with six Episcopal dioceses, the bishops are split: two have given the green light for priests to officiate at same-sex marriages, one has said absolutely not, two are undecided and one has staked out a middle ground, allowing priests to bless, but not officiate at, weddings of gay men and lesbians. 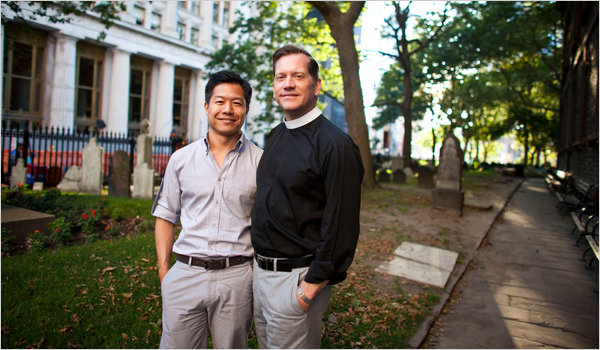 The Episcopal Church, known as one of the most welcoming to gay men and lesbians among mainline Protestant denominations, finds itself in an uneasy position on the issue — embracing neither the clear stance against same-sex marriage taken by Roman Catholic, evangelical Protestant, Muslim, Mormon and Orthodox Jewish leaders, nor the supportive position of Reform Jewish, Unitarian Universalist and many liberal Protestant leaders. The Episcopal Church is a small denomination — the church claims 172,623 members in New York State — but is also prestigious and influential.

Now, gay and lesbian Episcopalians are finding their joy at the legalization of same-sex marriage tempered by the ambiguity over where they stand in their church.

He and Father Crawley worship at St. Paul’s Chapel, which is part of Trinity Wall Street in Lower Manhattan. In keeping with the local bishop’s directive, Trinity’s priests will not officiate at same-sex marriages, and the parish has not decided whether to allow them to bless such unions.

The Episcopal Church’s rules define marriage as a “union of a man and a woman” but also say the clergy must “conform to the laws of the state” governing marriage. In 2009, the denomination approved a resolution saying that “bishops, particularly those in dioceses within civil jurisdictions where same-gender marriage, civil unions or domestic partnerships are legal, may provide generous pastoral response to meet the needs of members of this church.”

But New York State’s bishops differ over just what a “generous pastoral response” means, and even the bishops most supportive of gay rights are struggling to balance their desire to sanctify the relationships of all of their parishioners with their reluctance to further alienate conservative Anglicans in Africa and even the United States.

“It could appear to someone looking from outside the church that this is all we’re talking about, and it isn’t,” said Bishop Lawrence C. Provenzano of the Long Island Diocese. “It finds its place in the larger question of how you minister to the wider world.”

Bishop Provenzano, whose diocese includes Brooklyn and Queens, concluded that a “generous response” allowed presiding over the marriage rite. But Bishop Mark S. Sisk of the New York Diocese found that the “generous response” resolution did not supersede the canon law defining marriage.

“The landscape regarding marriage is still changing across the country, within the church and for gay or lesbian couples themselves,” Bishop Sisk, who supported the legalization of same-sex marriage, said in an interview conducted by e-mail. “The church is still in the process of creating liturgies for these rites and incorporating them into church law.”

A number of gay Episcopalians professed sympathy for what they viewed as Bishop Sisk’s effort to balance competing views.

“That’s a fair middle-of-the road-position,” said Mary O’Shaughnessy, coordinator of the New York metropolitan area chapter of Integrity USA, which advocates equal treatment for gay men and lesbians in the Episcopal Church. “There is nothing that I will call homophobic about that.”

“He’s between a very pointy rock and a very firm hard place,” said Mr. Baker, who plans to have his marriage blessed at the Church of the Ascension in Greenwich Village, where he has been a parishioner for two decades.

The situation is particularly awkward for gay priests like Father Crawley. Bishop Sisk has said that gay and lesbian priests “living in committed relationships” should marry — even though they cannot do so in church.

“That’s called hypocrisy,” said the Rev. Michael W. Hopkins, rector of the Church of St. Luke & St. Simon Cyrene in Rochester. Father Hopkins is a past president of Integrity USA.

But Bishop Sisk responded, “The expectation that clergy in relationships will marry is not a demand, nor does it come with a specific timeline.” He also said clergy members could be creative in fashioning liturgies that might include a civil marriage conducted in the church but solemnized by a secular official, followed by a pastoral blessing offered by a priest.

Some gay and lesbian Episcopalians said they were content to allow the church to proceed slowly because they believed it was moving in what they viewed as the right direction. The issue of same-sex marriage will most likely be raised again at the church’s next national conference, next summer.

“The bishop might be completely behind gay marriage, but he also understands that unless we have the conversation, and unless we are patient, the church will break,” said Javier Galitó-Cava, a gay Episcopalian and actor who worships at St. Paul’s. “I want to kick and scream and say ‘How dare you, I’m not a second class citizen’ — but if I want this to happen, for myself and for my children, we have to take it one step at a time.”