The Vatican has recalled its envoy to Ireland following Taoiseach Enda Kenny’s trenchant criticism of the Holy See’s role in covering up cases of clerical child sex abuse.

Deputy Vatican spokesman Father Ciro Benedettini said Archbishop Giuseppe Leanza, the Apostolic Nuncio of Ireland, had been recalled from Dublin for consultations in the wake of the Cloyne report. 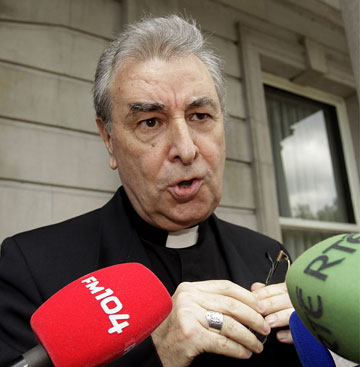 He said the principal aim of the recall was to make it easier for its secretary of state and other officials to prepare the Holy See’s official response to the Government in the wake of the Cloyne report into the mishandling of child sex abuse claims.

“The recall of the nuncio, being a measure verily adopted by the Holy See, denotes the seriousness of the situation and the Holy See’s desire to face it objectively and determinately,” he said. “Nor does it exclude some degree of surprise and disappointment at certain excessive reactions.”

Fr Benedettini added: “The recall of the nuncio should be interpreted as an expression of the desire of the Holy See for serious and effective collaboration with the (Irish) Government.”

Minister for Foreign Affairs Eamon Gilmore, who met Archbishop Leanza earlier this month, said the recall was a matter for the Holy See.

“The Government is awaiting the response of the Holy See to the recent report into the Catholic Diocese of Cloyne, and it is to be expected that the Vatican would wish to consult in depth with the nuncio on its response,” he added.

In language never used by an Irish leader, Mr Kenny last week accused the Vatican of downplaying the rape and torture of children in order to uphold its own power and reputation.

At the MacGill Summer School in Glenties, Co Donegal, last night, Mr Kenny said he had received “thousands” of messages from around the world in response to his speech.

This reflected the way people felt about this issue, he said. Mr Kenny added he was “astounded” by the number of clergy who had been in touch to say it was “about time” someone in his position spoke out.

The Taoiseach received a standing ovation when he finished delivering the annual lecture in honour of Nobel laureate and former SDLP leader John Hume at the opening session of the summer School.

Referring to his Dáil speech last Wednesday on the Cloyne report, he said: “I made a few remarks this week about children, which means a lot to me, I have to say.

“I just wanted people to understand that, when I say we live in a republic with laws and responsibilities and rights, I mean it. The fact that I have had thousands of messages from around the world speaks for itself about the impact and the way people feel.

“The numbers of members of the clergy who have been in touch in the last few days, to say it is about time somebody spoke out about these matters in a situation like you are, has astounded me,” Mr Kenny said.

“I haven’t made any other comment except to say that we await the response from the Vatican.

“I like to think that part of what we do in Government is to create the environment where the innocence of children can develop naturally through their formative years,” Mr Kenny said.

He said this was in the hope, “that when they grow up and grow old they will look back with a sense of pride and a sense of respect for where they came from”.