A struggle between the Catholic Church and feminist groups deepened Tuesday in Costa Rica, when the bishops denounced the “Marcha de la Putas” (Slutwalk) held Sunday in front of the Cathedral in San José was “insulting” to Christianity and violated “rule of law. “ 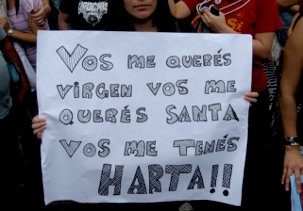 “Unfortunately, what was apparently a statement against sexual harassment and violence against women, became a protest violation of public morality and the rule of law,” said the Conferencia Episcopal (Episcopal Conference).

“Also, ‘the March’ in question was clearly defamatory and offensive to the Christian faith, which has identified and identifies the vast majority of Costa Ricans,” added the eight Costa Rican bishops in a statement.

The note of the bishops referred to the “Marcha de la Putas” which gathered on Sunday hundreds of people, especially women, to repudiate what they saw as sexist and patriarchal statements of the Catholic hierarchy.

“Soy puta, soy ramera, me visto como quiera” (I’m a bitch, I’m a whore, I dress as I want) shouted the protesters from the Central Park of San José, across the Cathedral, to those leaving Sunday morning mass.

A woman with bare breasts and her knees was fastened with heavy chains by a man dressed as a priest while he devoured rosaries and a parody of the submission that the Church has always exercised over women.

The “Marcha de la Putas” which has been performed in cities around the world to denounce sexual abuse and other forms of violence against women in Costa Rica had a deeply anticlerical tone, after Bishop Francisco Ulloa called on August 2, for women to dress “modestly.”

“My intervention was advice not mandatory, but based on the theology of the body of Pope John Paul II on modesty and decency that should be intrinsic to the woman who appreciates his sacred body of God,” was justified Ulloa Tuesday .

Ulloa sparked this conflict in his homily at a Mass celebrating the Virgen de los Angeles, the patron saint of Costa Rica, in the Basilica de La Virgen de Los Angeles, in Cartago during the “romeria” celebrations.