At least 100 gay priests across Italy were blackmailed by two people who met them on social networking websites, a media report said Friday.
The pair asked the priests for up to 10,000 euros each to keep quiet about their virtual sex sessions via webcam and in some cases, actual encounters, Italian weekly Panorama reported. 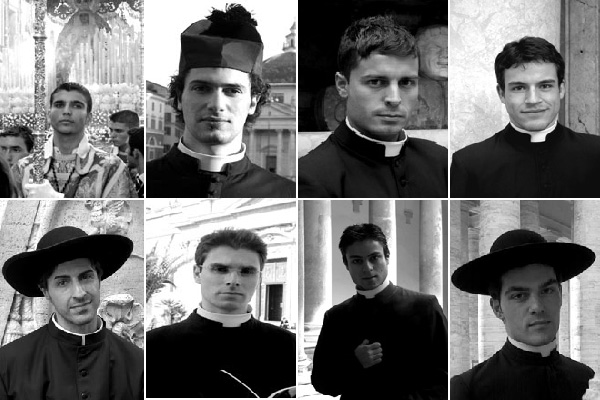 The weekly cited a judicial probe spearheaded by magistrates in the town of Isernia in Italy’s southern Molise region, which led to the arrest of Diego Maria Caoggiano, 35, and Giuseppe Trementino, 30, on July 26.

The men live together in the town of Bagnoli del Trigno, where they have been placed in house arrest, Panorama said.

Police found the contact details of over 100 priests on computers and mobile phones of the suspects, as well as video recordings of sex sessions involving priests and incriminating messages in what prosecutors described as a ‘disturbing’ case.
Trementino, a despatch rider, told Panorama through his lawyer that he had initially been seduced by a priest who he had delivered a parcel to and had sex with soon after they exchanged phone numbers.

The priest had made regular payments to him via Postpay ‘often of his own free will’ and had offered to buy him a car, Trementino claimed.

The priest reported Trementino to police in May but he, meanwhile, met another priest on the social networking website Facebook.

Trementino claimed to have spent three days with the priest in a hotel in Rome during a conference, and said the priest paid for his rail ticket and gave him 300 euros ‘to buy canabis, alcohol, condoms and lubricants’.

‘Asking them for money was a way of filtering the requests, which had got out of hand,’ he said, adding that he became ‘disgusted’ by the priests’ ‘absurd’ and ‘asphixiating’ needs.

Caggiano, who had access to Trementino’s computer and to his friends’ social networking profiles, appears to have been the chief blackmailer, asking some priests for up to 10,000 euros, according to investigators.

There are ‘a multitude of priests’ in Italy who are keen for sexual contact via the internet, where they exchange information on the casual partners they meet there, Isernia prosecutors said, cited by Panorama.