Ireland is squeezing the Roman Catholic Church to hand over cash and real estate toward a 1.4 billion-euro ($2 billion) child-abuse bill amid the bitterest stand-off yet seen between the Vatican and the government. 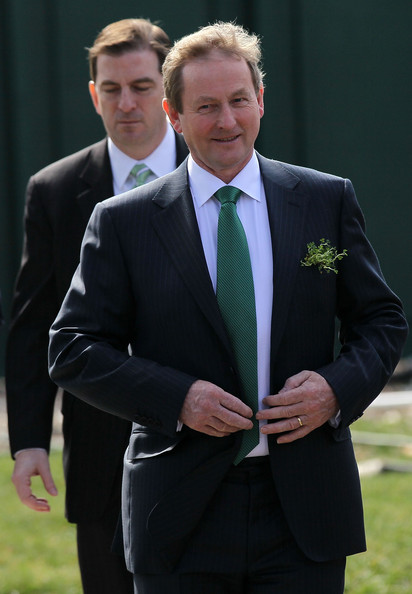 In the sharpest language an Irish leader has ever used against the church, Prime Minister Enda Kenny said last month the Vatican’s handling of the scandals has been dominated by “elitism and narcissism.”

“The relationship between the state and the Vatican has never been worse,” David Quinn, a religious commentator who is also director of the Dublin-based Iona Institute, which promotes religion in society, said in an interview. “I struggle to think of a stronger attack by a Western European leader on the church than Enda Kenny’s.”

Kenny said the church needs to be “truly and deeply penitent for the horrors it perpetrated, hid and denied” after three government reports on clerical abuse and cover-ups rocked one of Europe’s most devout societies. With the focus now moving to who compensates the victims in talks starting next month, the church’s riches and dominance of Ireland’s educational system face their most direct threat in the country’s modern history.

“The speech was a seminal moment in that Enda Kenny made clear that the state sees local bishops as the Vatican’s foot soldiers, but it’s the Vatican that is directing policy and practice,” Tom Inglis, a sociology professor at University College Dublin, said in an interview. “He’s following public opinion, not molding it, but it takes an adroit politician to know when the timing is right.”

Compensation Meetings
Kenny’s education minister, Ruairi Quinn, will begin meetings in September with 18 religious orders to call on them to pay half the compensation bill for abuse in children’s homes they ran. The 2009 government-commissioned Ryan Report said abuse in those homes was “endemic.”

The orders have paid or offered about 300 million euros to date in cash and real estate, and Quinn is proposing that they hand over control of more land, including schools. About 90 percent of elementary schools remain Catholic-run, according to the Education Ministry.

“Quinn knows that control of the education system is key now and control is about both land and patronage,” said Inglis. “He’s now making the running, not the church.”

Constitutional Role
For much of Ireland’s history since independence from Britain in 1922, it was the other way around. In 1937, the government consulted the archbishop of Dublin while drafting the constitution, which recognized the special position of the Catholic Church “as the guardian of the faith of the great majority of the people.”

Though that clause was later removed, Catholic thinking continued to underpin Irish legislation. Up to 1985, condoms couldn’t be bought without a doctor’s prescription. Divorce was only legalized after a 1995 popular vote, and abortion still isn’t allowed in most circumstances.

As revelations of abuse and the church’s concealment of it have emerged, the relationship has soured. Last month, a government-commissioned probe into the handling of abuse allegations in Cloyne in southern Ireland concluded that the Vatican “effectively gave Irish bishops freedom to ignore” state guidelines, prompting Kenny’s intervention.

Prosecution Halted
The report examined the handling of allegations against 19 clerics between 1996 and 2009. To date, one priest from the diocese has been convicted of child sex abuse, while a second prosecution was halted on the grounds of ill health, delay and age.
“The rape and torture of children were downplayed or managed, to uphold instead the primacy of the institution, its power, standing and reputation,” Kenny said in parliament on July 20.

The Vatican pledged to respond “expediently” to the report in an e-mail sent by a spokesman, Federico Lombardi, the day after Kenny’s remarks. Four days later, the Vatican recalled its ambassador to Dublin citing the “reactions” that followed the Cloyne report, in what David Quinn said he interpreted “as a pretty strong protest.”
Eighty-five percent of the Irish population are nominally Catholic, according to the Central Statistics Office. Mass attendance was around 78 percent in 1992, falling to about 65 percent in 1997, according to Diarmaid Ferriter, author of “The Transformation of Ireland: 1900-2000.” A poll conducted for the Iona Institute in 2009 found that 65 percent go to church at least once a month.

Payments to Victims
The government has made about 14,000 payouts averaging 62,878 euros to victims of abuse in residential homes, according to the agency which handles the awards. A further 157 million euros have been paid been out in legal fees.

In 2002, the government agreed to cap the religious orders’ contribution at 128 million euros. Now, with the bill rising and a budget deficit forecast at 10 percent of gross domestic product this year, ministers are pushing for a 50-50 contribution, amounting to about 680 million euros. The shortfall on what’s been offered so far is about 350 million euros.

Already, some orders are resisting. The Sisters of Mercy, which controls schools across the country, refused to attend a meeting with Quinn last month. The order, which said it had been “misrepresented and demonized,” said it never agreed to the 50-50 split.
“It has been wrongly suggested that the congregation has disadvantaged the state in that it has failed to honor a debt,” the Sisters said in a statement on July 22. “The congregation has met and will continue to meet all of its commitments to former residents and to the state.”

The order may be fighting against the weight of public opinion.
“I’m disappointed with the Vatican’s handling of it,” said Anne McCarron, 71, a retired nurse from Inishowen in northwest Ireland. “The Vatican has been too aloof, I share Enda Kenny’s anger. The church should pay more money to victims.”