More than 100 priests from Madrid’s poorest parishes have added their voices to the growing protest at the cost of Pope Benedict’s visit to Madrid next week. 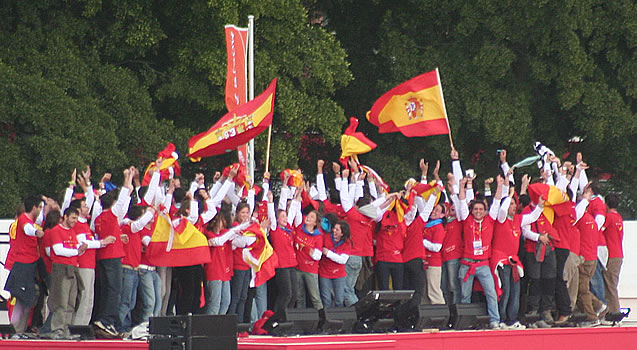 An umbrella group – the Priest’s Forum – says the estimated €60m (£53m) cost of the papal visit, not counting security, cannot be justified at a time of massive public sector cuts and 20% unemployment in Spain.

Evaristo Villar, a 68-year-old member of the group, said he objected to the multinationals with which the Catholic church has had to ally itself to cover the costs of the “showmanship” of the event.

“The companies that are backing World Youth Day and the pope’s visit leave much to be desired,” he said. “They are the ones who, together with international capital, have caused the crisis. We are not against the pope’s visit, we are against the way it is being staged.”

The more than 100 corporate sponsors of the event include Coca-Cola, Telefónica and Santander.

Opponents of the visit have set up a Facebook page calling for a boycott of the sponsors.

Some 140 groups, among them the secular organisation Europa Laica (Secular Europe), are against the visit.

“Catholics can go wherever they like in Madrid but the freedom of movement of the rest of us is restricted,” said Francisco Delgado, leader of Europa Laica, on discovering that the city had prohibited his group’s proposed march.

Europa Laica plans to march under the slogans “Not a penny of my taxes for the pope” and “For a secular state”.

There is particular ire that the some 500,000 pilgrims expected in the city will get free transport.

“With the economic crisis we are going through, we can’t pay for this. The church should set the example,” said a spokesman for the Indignados movement, which has staged high-profile protests in central Madrid.

“They propose to spend €60m when the regional government has just cut €40m from the education budget.”

Yago de la Cierva, the executive director of World Youth Day 2011, an event built around the papal visit, said: “We have made a huge effort to be moderate and economically responsible. The new generations – young people today – they like big events and the church uses all the tools that exist to present the message of Jesus Christ.”

Interest in the Catholic church is on the wane among young people in Spain.

A recent survey by the national statistics office showed that the number of believers aged 18 to 24 has fallen by 56% in the past 10 years.

The pope’s visit to Barcelona last November was poorly received, with the popemobile forced to drive at top speed past small groups of the faithful along mainly deserted streets.