A recent series of advertisements attacking homosexuality has dragged the Catholic Diocese of El Paso into a citywide political recall debate. 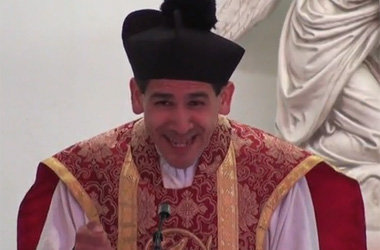 The advertisements, titled “The truth about homosexuality,” were written by the Rev. Michael Rodriguez of San Juan Bautista Catholic Church and published in four parts in four consecutive editions of the El Paso Times. The ads started running on Saturday and ended Tuesday. The advertisements were also on elpasotimes.com.

While Rodriguez maintains the ads represent the teachings of the Roman Catholic Church, officials of the Diocese of El Paso said they do not.

“These paid advertisements are the personal views and opinions of Father Michael Rodriguez,” said the Rev. Anthony C. Celino, the vicar general and moderator of the curia for the diocese.

Celino said the Catholic Church is not taking and cannot take a side in the recall effort.
The advertisements quote several Bible passages and denounce homosexuality and any encouragement of homosexuality. It also alluded to Mayor John Cook and city Reps. Susie Byrd and Steve Ortega, who are currently the target of a recall petition, organized by Word of Life Church Pastor Tom Brown.

“All Catholics have a moral obligation before God to oppose any government attempt to legalize same-sex unions,” Rodriguez wrote in part two of the series. “Here in El Paso, certain City Council members have remained obstinate in promoting public recognition and legitimization of homosexual unions. Whether
Advertisement

they realize it or not, their actions are objectively immoral and gravely harmful to marriage and the family. It should be obvious to all Catholics what our duty is with respect to these members of City Council.”

Rodriguez said he wrote the pieces but did not pay for the advertisements or submit the writings to the Times.

A couple from Plano, Texas, paid for the advertisements, he said.
“I decided to write these articles primarily because it’s my duty as a Catholic priest to teach the truth when it comes to faith and morals,” Rodriguez said in a written statement to the Times. “My mission is to labor for the glory of God and the salvation of souls. That’s why I wrote the articles. The government has no right to undermine or redefine the institution of marriage. This is beyond the scope of their competence.”

Rodriguez said he also did not like the fact that the City Council went against the voters’wishes by providing health benefits to the gay and unmarried partners of city employees despite the fact that the public voted not to do that.

“Furthermore, the government has no right to undermine basic public morality,” Rodriguez said. “Unfortunately, members of El Paso’s City Council have made decisions that are immoral, irrational, and contrary to the common good of our city.”

Byrd said the advertisements are a political action because they alluded to the recall effort.

“To me, that is not the most terrible thing about the ad,” Byrd said. “What is, is the fact that he spent a lot of time and money to harm a group in our community.”

Ortega said he does not believe that religion should be mixed with government.
“I haven’t read his opinion pieces,” Ortega said. “I firmly believe in the principle of separation of church and state and therefore his opinions, as a priest, carry absolutely no weight with me as a public official.”

Brown said the advertisements came as a pleasant surprise.
“I think it’s wonderful. It is freedom of speech,” Brown said. “Ultimately, I agree with Rodriguez.”

Brown said the diocese should not remain silent on the recall because it goes against the Catholic faith.
“I think the Catholics should have an opinion,” he said.

Paul Landernan, an adviser for the El Paso chapter of the Stonewall Young Democrats, said that his organization — a youth-based organization that supports lesbian, gay, bisexual and transgender rights in the United States — is disappointed that Rodriguez is still stuck in the 19th century.

“He has official duties for the people of his parish,” Landernan said, “some of whom are parents of gay people, related to gay people or work with gay people every day.”
Rodriguez’s words can divide communities, Landernan said.
“Why would a person like this have that level of a violent reaction to the evolution of our society?” he asked. “He suddenly turned the clock back 40 to 50 years to a time when the Jim Crow-type of thinking was acceptable.”

In two weeks, recall petitions for Cook, Byrd and Ortega will be due at City Hall. Landernan said the advertisements’ timing was “curious.”

“It would have been a blip on the radar” if Rodriguez were not a priest, Landernan said. “And really, the church is almost a victim in this. He has almost used the name of the church without authorization.”

The controversy was not limited to the paid advertisements.
On Aug. 21, members of St. Raphael Catholic Church found fliers on their car windshields after church services.

The fliers said, “Éour popes and bishops have reminded us that we must oppose all government efforts to legitimize homosexual unions by attempting to equate them with marriage.”
The fliers also said, “Members of the City Council and the mayor have violated our rights and overturned our popular vote. We must hold our politicians accountable and insist that they truly serve our people.”

The church’s head priest, Monsignor Francis Smith, and the diocese said the fliers were not approved by or affiliated with the church.
“The diocese does not endorse or oppose candidates, political parties, or take actions that can be construed as endorsement or opposition,” Celino said. “Recall fliers claiming to be ‘Catholic’ were not authorized by the Diocese of El Paso.”

Smith said the people who distributed the fliers sneaked into the church’s parking lot during that Sunday’s two largest Masses.
“I always tell my people that if they stick it under your windshield, I did not authorize that,” Smith said. “If it is something worthwhile, then why be sneaky about it.”

The message on the fliers is not what Smith preaches at his church, he said.
“We have been asked several times to take their stance, and we will not,” Smith said. “I do not agree with that lifestyle (homosexuality), but I will help anyone who needs it.”
The fliers also list names and numbers of individuals who filed the intent to recall Cook, Byrd and Ortega.

Two of those individuals, Ben Mendoza and Nacho Padilla, said they had no prior knowledge of the fliers. Neither did Brown, he said.
“I personally would not authorize that,” Mendoza said. “I can see handing it out on the sidewalk, but not on cars.”

Mendoza said he is for the recall because the people’s vote was overthrown and he believes that should be the main issue.

Padilla said the fliers led to more individuals signing petitions.
“What they did has worked really positive,” Padilla said. “We have gotten a lot of signatures. We won’t deny that.”

Brown said he was proud that those who support the recall are acting on their own.
“It’s a free country, and people are free to promote however they want,” Brown said.
Brown said “we’d like to make more progress” as the deadline nears to turn in recall petitions.

“I’d like to say we can predict victory, but we are not there yet. We need to keep working.”