Catholics academics, professionals and pastoral workers were among the speakers at a recent Fordham University conference, which sought, according to the program, to “raise awareness and generate informed conversation about sexual diversity issues within the community of faith and in the broader civic world that the Catholic Church and the Catholic people inhabit.” 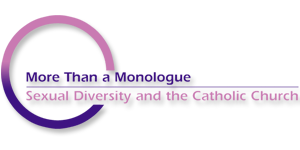 The conference, held on Sept. 16, was titled “Learning to Listen: Voices of Sexual Diversity and the Catholic Church,” and was the first of a four-part series called “More than a Monologue: Sexual Diversity and the Catholic Church.” The series also will include conferences hosted by Union Theological Seminary, Yale Divinity School and Fairfield University. Although the conferences are thematically connected, each one has been independently planned by its respective institution. Each one seeks to more clearly depict the experience of people who are gay, lesbian, bisexual or transgender in the church.

Approximately 370 people attended the Fordham conference, which was made up of three panel discussions. During a press conference, Paul Lakeland, the Aloysius P. Kelley, S.J., Professor of Catholic Studies and Director of the Center for American Catholic Studies at Fairfield University, said that while many people are aware of the church’s teachings on sexual ethics, he hoped the conferences would help speak to issues that are not directly addressed by those teachings.

“When you say more than a monologue, people say, ‘Oh, the bishops are the monologue, and now we want to get all the other voices in,’ but that’s not strictly the case,” Lakeland said. “There’s a monologue in the sense that: wherever you stand in the debate on sexual ethics, that’s a sort of monologue.” Views on both sides are often one-dimensional, he added. “But when we ask questions—What is the experience of gay and lesbian Catholics in the church? Or what about teen suicide? Or what about the relationship between the church and the legal system as they look at sam…..