For the first time since the Catholic sex abuse scandal broke in the United States 25 years ago, a bishop has been indicted for allegedly covering up for a sexually abusive priest.

Our first reaction: It’s about time.

Our next reaction: It’s outrageous that — after settlements with roughly 6,000 abuse victims, more than 15,000 allegations and $3 billion in payments, according to bishop-accountability.org — a Catholic church official is suspected of facilitating and hiding more despicable behavior. 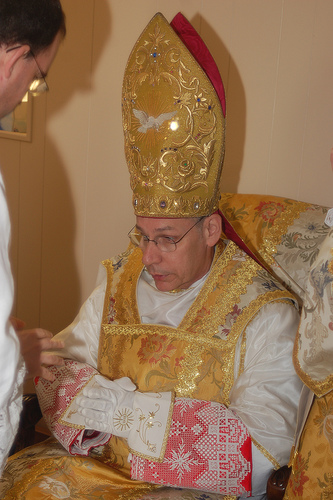 The courts will decide whether Kansas City Bishop Robert Finn hid abuse that occurred as recently as last year, but there was enough evidence for a grand jury to hand up charges of failure to report suspected child abuse, and that’s a start.

Prosecutors across the United States should continue to chase sex abuse as high up the church’s ladder as necessary to protect children. Sex abusers who hide in religious garb and prey upon the church’s most vulnerable members should be prosecuted fully, along with anyone — of any church rank — who protects these predators.

For years, the Roman Catholic hierarchy has protected criminal priests by denying or covering up sex abuse. Known abusers were moved from one parish to another, and many repeated their crimes.

Under pressure, bishops passed a charter 10 years ago pledging to report suspected abusers to law enforcement agencies. Prosecutors say Finn violated that pledge (along with a similar pledge he made recently) and the law by trying to hide abuse by the Rev. Shawn Ratigan.

Ratigan was arrested in May and indicted by a federal grand jury on charges of taking indecent photographs of young girls, most recently at an Easter egg hunt last spring. Photos found on Ratigan’s laptop included a child’s vagina, upskirt images and other crotch photos.

Finn admitted knowing about the photos last December, but he didn’t tell police until May.

A civil lawsuit asserts that between December 2010 (when Finn knew of the photos) and May 2011, Ratigan attended children’s birthday parties, spent weekends in the homes of parish families, hosted an Easter egg hunt and presided at a girl’s First Communion.

Three years ago, Finn settled lawsuits with 47 plaintiffs in sexual abuse cases for $10 million. He took responsibility and apologized. When charges were announced against Ratigan, Finn again accepted blame and again apologized.

Let the indictment be a lesson: Apologies (and money) aren’t enough anymore. Bishops believed to be part of a cover-up will be treated as they should be — suspected criminals.