MAYBE it’s the Mario Lanza in him. But Nino Scalia relishes being operatically imprudent. 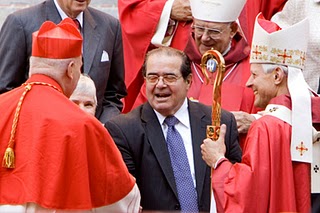 The Supreme Court justice’s latest supreme lapse of judgment involves poking his nose in a local legal wrangle about the place where I slept for four years: the Catholic University dorms.

“Our educational establishment these days, while so tolerant of and even insistent on diversity in all other aspects of life, seems bent on eliminating the diversity of moral judgment, particularly moral judgment based on religious views,” the devout Catholic said.

In June, the president of Catholic U., John Garvey, wrote an op-ed piece in The Wall Street Journal explaining why, as a father of five, he felt the need to resort to a “countercultural” and “slightly old-fashioned remedy,” ending 25 years of coed dorms. He said he believed single-sex dorms would “improve the practice of virtue,” reducing binge drinking and “the culture of hooking up.”

Using a formula that’s the inverse of “Sex and the City,” Garvey wrote: “Rates of depression reach 20 percent for young women who have had two or more sexual partners in the last year, almost double the rate for women who have had none. Sexually active young men do more poorly than abstainers in their academic work.”

He made note of the sad slide from proud feminism to proud sluttiness. “I would have thought that young women would have a civilizing influence on young men,” he wrote. “Yet the causal arrow seems to run the other way.”

Banzhaf, who calls Garvey’s arguments “totally secular,” pronounced himself “astonished that a justice of the nation’s highest court would single out and prejudge a legal proceeding which could set an important precedent, and could one day even come before the U.S. Supreme Court.”

As the Supreme Court gets ready to go into session on Monday, its six Catholic justices were set to merge church and state by attending the traditional first-Sunday-in-October Red Mass at St. Matthew’s Cathedral. (It’s hard to believe there’s no Protestant on the Supreme Court.) Through the years, the presiding clergy have aimed their homilies against abortion, gay marriage and “humanism.” Justices of other faiths have attended; but as Dahlia Lithwick wrote in Slate, “Justice Ruth Bader Ginsburg stopped attending the Red Mass altogether after hearing her very first homily, which she has described as ‘outrageously anti-abortion.’ ”

In 2007, there was a kerfuffle about Catholic dominance on the court because the five justices who pushed to uphold the ban on “partial-birth abortion” were all Catholic men appointed by conservative presidents.

The church has aggressively meddled in politics on abortion, trying to defeat candidates who support abortion rights and prevent some liberal politicians from receiving Communion. But American bishops have been inconsistent in preaching their values.

They do not try to bring down politicians who supported the Iraq war, even though Pope John Paul II spoke out against it and sent a Vatican cardinal to warn W. that the war would be a “disaster” that would “destroy human life.” They do not express outrage at Republican audiences that cheer for executions, or target pols who brag on the death penalty, even though John Paul issued an encyclical against “the culture of death,” saying modern states have so many ways to protect citizens that the necessity for executions is “very rare, if not practically nonexistent.”

Scalia, confident in his own infallibility, dissented. As he wrote in a religious journal in 2002, he does not find the death penalty immoral, and he believes that as the “minister of God,” government has powers to get “revenge” and “execute wrath.” He’s clearly more an Old Testament guy than New, or he would know that some prisoners get falsely accused and nailed to the cross (Matthew 26:59-66).

Now Scalia has dissented from the opinion of a second pope on the issue. Pope Benedict sent Georgia state officials a letter last month asking for clemency for Troy Davis, but the very Catholic Supreme Court denied a last-minute stay of execution.

In his Duquesne speech, Scalia said: “If I thought that Catholic doctrine held the death penalty to be immoral, I would resign. I could not be a part of a system that imposes it.”

My family priest, Father Kevin O’Neil, teaches about “cooperation in evil” in Catholic moral theology. If you facilitate something that has been deemed wrong, like taking a human life, are you cooperating in evil?

Maybe the Supreme Court should ask itself that question. Are you “cooperating in evil,” Justice Scalia?