Publicly, he is a religious brother with a Roman Catholic order.

Privately, although he took vows of poverty, chastity and obedience, he said, at 23 he was a sex addict, anonymously cruising bars, parks and Cook County Forest Preserves for quick hookups. 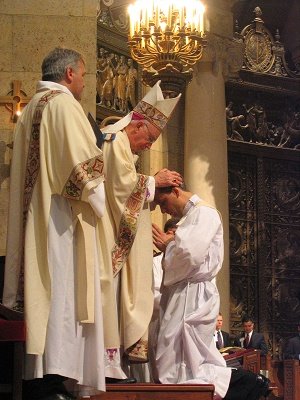 Six years ago, his superiors found out and encouraged him to seek help. He agreed readily and spent the next six months in intense therapy at a residential treatment clinic north of Toronto for male and female church ministers with psychological and addiction problems.

Brother Patrick has been chaste ever since (his real name is being withheld because he requested anonymity). Now 49, a California native with a singsong lilt to his voice and John Lennon-style wire rim glasses, he is a founding member of one of the country’s few celibacy support groups for priests and religious.

Allan Schnarr, a clinical psychologist who teaches at Loyola University of Chicago and former priest who spent 10 years in the Resurrectionist religious order, started the group in 2009 at the request of a client, a priest.

Monday mornings twice a month ever since, Brother Patrick and the three other brothers and priests in the support group meet in Hyde Park at the Claret Center, which offers psychotherapeutic services and spiritual direction. Seated in a circle in the center’s homey conference room, they discuss the spiritual and emotional struggles and joys of being true to their vows.

“Unfortunately, the church has embraced the notion that once you’ve chosen this profession your sexuality goes away,” Brother Patrick said. “But it doesn’t. God would never expect something so absurd as that.”

Instead, he added, you have to nurture it in different ways. “If you can’t and you’re afraid to talk about it, and your sexuality becomes a big, dirty secret, then eventually, somehow or other, it’s going to get vented in an unhealthy way,” he said.

The Rev. Shawn McKnight, executive director of the Secretariat of Clergy, Consecrated Life and Vocations at the United States Conference of Catholic Bishops, said that celibacy, which is mandatory for Roman Catholic priests and religious, was “the commitment to renounce one’s natural right to marriage and to live a chaste life for the kingdom of God.”

“Sexual thoughts, temptations, attractions, are part of being human,” Father McKnight said. “But it’s how you respond to them. We don’t do things or engage ourselves in things where sexual gratification will be the end.”

“Sex is really very close to an addiction. It’s a drive that doesn’t go away,” Sipe said. “If you’re going to live without it, you can’t live like a normal person. You can’t just say one day, ‘I’m celibate.’ Celibacy is a process. The lack of training is a huge piece of the problem.”

The church has struggled for years with notorious cases of priests sexually abusing children and, frequently, with cover-ups of such practices. A 2004 John Jay College of Criminal Justice study commissioned by the United States Conference of Catholic Bishops found that roughly 4 percent of priests ordained between 1950 and 2002 faced allegations of sexual abuse against minors. A more recent report put the figure closer to 5 percent.

For Father Lawrence (his confirmation name), 61, another member of Brother Patrick’s support group, the secrecy shrouding celibacy is equally troublesome. “How are you supposed to know how to follow the rules of celibacy if you can’t even discuss it?” he said.

When Father Lawrence was in the seminary in the 1970s, he asked how to handle sexual desires and lustful thoughts. He was told to go to confession. Nowadays, if he tries to broach the topic with colleagues in his order, he is met with silence. “When the child abuse scandals broke, people started talking, but about the lawsuits, the cover-ups, how much it was costing the church,” Father Lawrence said.

Only in the support group, with members of varying sexual orientations, does he share the details of how he copes with celibacy without fear of being judged or “having to toe the religious line,” Father Lawrence said.

The Archdiocese of Chicago approves of the support group. “Anything that would help priests in their struggle with celibacy and support priests in the commitment to celibacy is welcomed by the church,” said the Rev. John Collins, vicar for priests for the archdiocese.

Still, some of the ideas discussed by the support-group members are contrary to Roman Catholic orthodoxy. “Celibacy is an unreal ideal with expectations that can’t be met and doesn’t have anything to do with being a good priest. I think it should be optional,” said Father Lawrence, who has been in love twice but “never crossed the line,” he said.

“I take my vow seriously,” he said. “Have there been temptations? Yes. I have attractions every day. And I thank God for that. It tells me that I’m a normal human being.”

Schnarr, who facilitates the support group, said that finding a way to be fully human within celibacy was the challenge.

“The traditional, conservative approach to celibacy is to snuff out anything that can stir sexual feelings,” said Schnarr. “That means shutting down emotions and keeping a professional distance in all relationships.”

At meetings, the group engages in frank, personal conversations about where to draw the line between healthy intimacy and celibacy, about who defines what that line is, about “how to accept and love yourself when you fall short of your ideals and trust that God still accepts you,” Schnarr said.

“Because of the charges of pedophilia, priests have been through a horrifying fall from grace. There is extra pressure on priests,” Schnarr said. ”When you can talk openly with others about what’s really going on inside, it helps to heal the shame and paradoxically makes it easier to be true to your commitments.”