Fr. James Alison, one of only a “handful” of gay Catholic theologians, spoke Monday about the prevailing sense of homophobia in the Catholic church and how the issue can be combated today, in an event sponsored by Campus Ministry, the Triangle Club and OMA. 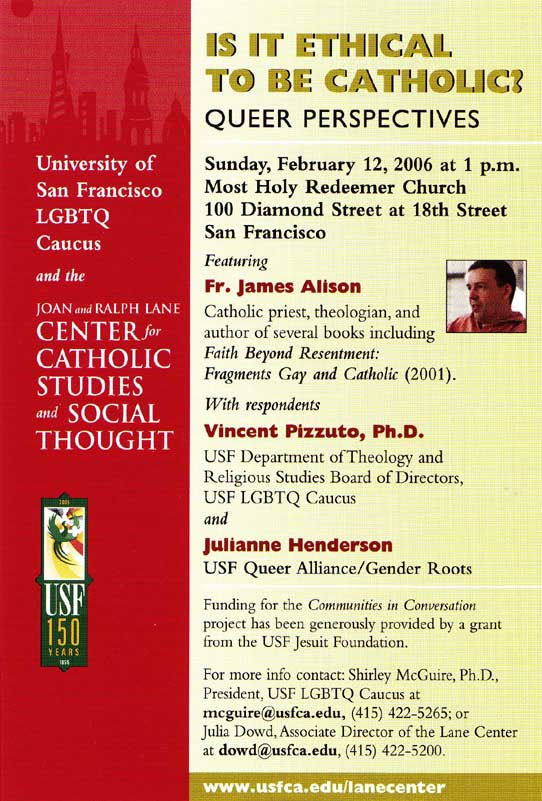 “Fr. Alison was able to speak across our isolated areas of life and is an example of what we hope for students,” said Nicholas Coffman, chapel coordinator and campus minister. “The purpose of the event was to build community and welcome students.”

The British-born Alison, a member of the clergy since age 18, began by addressing the history of homosexuality in Europe and how it was viewed in the church, then moved into a discussion of contemporary debate on the issue. He noted that, before the 16th century, many groups in Europe were divided along gendered lines, with the two groups barely interacting with one another.

“When the idea of heterosexuality began emerging, this was mega-weird in the West,” said Alison.

He continues that it wasn’t until the beginning of the 16th century that homosexuality began to be viewed as “odd,” a type of “othering” that would continue to grow into the 19th century.

He cites Evelyn Hooker’s 1957 study “The Adjustment of the Male Overt Homosexual” as one of the turning points in this type of thinking. Her study demonstrated that, according to Alison, “there is no link between screwed-up-ness and sexuality and that we are all as screwed up as each other.”

This type of post-World War II trend has continued, establishing the belief that homosexuality is not a social problem that can be solved, but simply a “non-pathological variant within the human condition, like left-handedness.”

Alison made clear distinctions between the views of the laity and the views of the Catholic hierarchy post-World War II, and points to the fact that while issues like gay marriage have been openly adopted in heavily Catholic countries, church officials have been slow to bring about open dialogues in addressing the issue.
“It puts the church in the rather difficult position of living 50 years out of date,” Alison said. “In the last 50 to 60 years we’ve had a collapse of the ‘Don’t Ask, Don’t Tell’ policy in lay society, but not the church hierarchy.”

To help combat this prevailing sense of homophobia in Catholic hierarchy, Alison is quick to point out the church’s own teachings which can be utilized to help fight this attitude. He looks to the Catholic idea that “Grace Perfects Nature,” or the idea that followers of the faith can flourish where they are in life. However, for this to happen, church authorities must go beyond a negative view of homosexuality to accept the idea that homosexuality is not a defect in social behavior before “flourishing” can happen.

Alison points to the fact that many lay Catholics today have already embraced this idea, shown in the legalizing of gay marriage in places like Brazil, Mexico and even New York.
“They understand the idea that ‘If that’s what they are, they must be the best of what they are,’ and can see the reality of what that means,” Alison said.
Alison also challenges future generations to better understand what same-sex marriage means in a Catholic setting, and what the “shape of God’s blessing,” means in that setting.

While Alison acknowledges that change will only come about at a slow pace to the hierarchy, he notes the “marked change of the past 15 years” and hopes that the conversation is able to develop in creative ways.”

Coffman echoes Alison’s sentiments, hoping that people, especially in the United States, will continue to engage in a discussion that recognizes the openness of the Catholic faith, and that it emphasizes a gospel of love.

“It’s a matter of time before the church recognizes that we have a responsibility to be in partnership with our homosexual brothers and sisters and be bound up in their own flourishing, because their flourishing is bound up in ours. We are no longer the us and them, we are now we.”

Due to time constraints, representatives of Campus Ministry could not be reached for comment.