The Associated Press has another disturbing story about the ongoing investigation into the Legion of Christ, once the darling of the Vatican establishment and a special favorite of Pope John Paul II, whose founder, Marciel Maciel, turned out to be a drug addict and pedophile, who also fathered children with at least two women and whose financial machinations included bribery and financial misconduct. 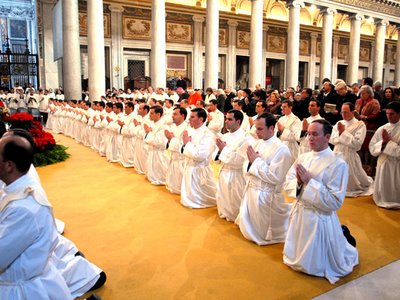 Now, as Legionaires leave the order in droves, the Italian cardinal charged with cleaning up the mess has taken a pass on digging up the truth and removing from leadership those that abetted Maciel’s crimes, including those against his own seminarians. From the AP story:

“I don’t see what good would be served” by further inquiry into a coverup, the Italian cardinal [Velasio De Paolis] said. “Rather, we would run the risk of finding ourselves in an intrigue with no end. Because these are things that are too private for me to go investigating.”

Too private? It’s that kind of “privacy” that abets those who abuse their power, especially in sexual ways. Another word for it is secrecy.

If the church ever needed a South Africa-style Truth and Reconciliation Commission,

the Legion situation is it. Journalists such as Jason Berry have uncovered the financial means by which Maciel exerted influence in the Vatican (see his book Render unto Rome), including outright bribes to influential Vatican officials. The perversity of Maciel’s sexual behavior is magnified by the perversity of the Legion’s formation, which forbid criticism of the founder and required loyalty oaths and secrecy, all contrary to the gospel.

De Paolis as much as admitted that he could discern no overriding “charism” in the Legion–the mission or driving force behind its mission–which is reason enough to disband it. (“Bella domanda”–“good question”–he answered in the AP story.) Indeed, the Legion was created out of Maciel’s profound sinfulness, through which he manipulated the good intentions of the many people who came to join him. It is the duty of the church to help them heal, and if they are able, to find other ways to serve God’s people.

The Legion itself must go–but only after what is still hidden in darkness is brought to light.