A former member of the Brothers of Holy Cross, disillusioned by the widespread sexual abuse and cover-ups in the Catholic order, wrote a letter in 2007 to Anthony Mancini, then bishop of the Montreal Archdiocese, about the “dysfunctional situation.” 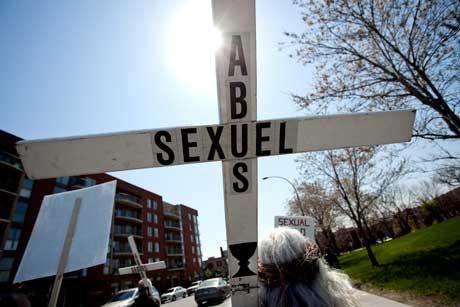 Wilson Kennedy wrote that he left the religious community, to which he’d belonged for 20 years, because he could not accept a “culture that rewarded individuals for inappropriate behaviour and actions.”

Kennedy says he also had a long phone conversation with Mancini’s secretary, detailing the brothers’ sexual abuse of students at College Notre Dame and in other institutions run by the order, including St. Joseph’s Oratory.

He never heard back.

This weekend, Mancini, now Archbishop of the Archdiocese of Halifax, will be among scholars and religious leaders speaking at a conference studying the crisis that has shaken the Catholic Church.

Mancini couldn’t be reached for comment, but Lucie Martineau, spokeswoman for the Archdiocese of Montreal, said Kennedy’s letter was never received. Mancini’s secretary is on sick leave, but the archdiocese also has no knowledge of a conversation she may have had with Kennedy.

“It’s not as if I was calling about a church function happening next week,” Kennedy said Wednesday. “I told her I was a religious brother and wanted to talk to (Mancini) about sexual abuse and the whole coverup.

“You don’t get those kinds of calls every day.”

Dan Cere, one of the organizers of the conference taking place at McGill University, said Mancini was invited to speak because, as archbishop of Halifax when Nova Scotia Bishop Raymond Lahey was arrested in 2009 for possession of child pornography, Mancini “stepped up to the plate to grapple with it.”

Lahey was picked up at the Ottawa airport while returning to Nova Scotia from a trip to Europe. His laptop held 588 graphic images of child pornography, 33 videos and pornographic stories featuring children enslaved and degraded.

A week earlier, he’d brokered a $15-million settlement for victims of sexual abuse by priests of the diocese of Antigonish in Nova Scotia dating back to 1950. At the time, Lahey apologized to the victims on behalf of the church.

“I think those like Anthony Mancini, who had some connection to him, they were genuinely stunned,” said Cere, a McGill professor of religion, ethics and law. “It was wrenching for them to see someone they had put a lot of trust in and suddenly at that level betraying the trust.”

The conference, entitled Trauma and Transformation, will gather mainly academics with diverse backgrounds.

In his 2007 letter to Mancini, Kennedy wrote that he’d asked to leave the order because he was living in a “dysfunctional situation which has affected me physically, emotionally, psychologically and spiritually.”

After receiving no support for his concerns from anyone in the church hierarchy, Kennedy turned to the media. In December 2008, The Gazette published an in-depth report about the abuse — of which the order’s internal documents showed even Rome was aware.

The Brothers of Holy Cross maintained that Kennedy was simply trying to blackmail them with false allegations to get more money from them after leaving the order in July 2007. But faced with documented proof of the abuse and a class-action suit, they agreed last week to pay their victims $18 million in damages. They also apologized for “acts that should never have happened.”

But the victims, many of whom have suffered silently all these years, wonder why the congregation hasn’t taken any punitive action against the abusers, most of whom are living, all-expenses paid, in the brothers’ comfortable retirement home in Laval, Que.