SOUTH Melbourne is again fighting to keep its beloved priest, Father Bob Maguire, after the Catholic Archdiocese of Melbourne secretly signed a contract with the Capuchin religious order to run the parish from February. 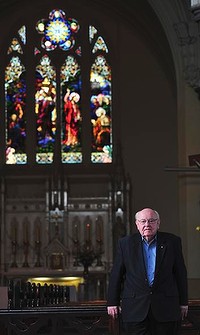 The charismatic Father Maguire, 2011 Victorian of the Year and a noted media personality, yesterday blamed Sydney’s Cardinal George Pell, saying his removal was part of the cardinal’s battle to enforce his own highly conservative view of Catholicism.

Two years ago, the high-profile priest won a battle of wills with Melbourne Archbishop Denis Hart, who wanted him to stand down at the optional retirement age of 75 and suggested Father Maguire was not financially competent.

After a public outcry, a compromise was reached whereby Father Maguire would retire next February, but South Melbourne Parish Council chairman Tony Long said yesterday the parishioners wanted him to stay on.

Mr Long said the archdiocese signed up the Capuchins without a word to the parish, an approach he said was contemptible, tawdry and distressing.

When he and another parish councillor met two Capuchin representatives last week, it emerged only by accident that the Capuchins had been offered the parish and accepted, Mr Long said.

”We were shocked. We were working towards asking for an extension [for Father Maguire]. Given the shortage of parish priests, why wouldn’t they use someone who is active and able?”

He said some might see the lack of courtesy as minor, that the archdiocese had the authority and did not need the involvement of the parish.

”But it was a contemptible thing to do.”

In South Melbourne, they see it as part of Catholicism’s culture wars, in which a threatened hierarchy is trying to enforce a rigid uniformity.

Father Maguire quoted a speech by Cardinal Pell in Ireland last year, ”where he said his life’s aim is to end cafeteria Catholicism. He represents authentic Catholicism.

”Then the deal is done without a word to anyone. That’s the Roman model.”

He acknowledged that at 77 he was past retirement age, but said he was fit and well.

Mr Long said ”vacuuming Bob out” had the feel of sending people out of favour to the gulag.

The Capuchins are a branch of the Franciscan order, who broke off in 1528 to seek a simpler monastic style.

In Australia, the order has 45 to 50 priests and brothers.