That the Roman Catholic Church hierarchy is on the warpath over LGBT rights, and are even going so far as to claim that any rights given to LGBT people limit the rights of 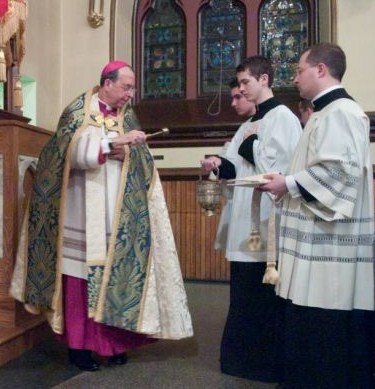 Catholics is not even sitting well now with the Catholic laity. The Rainbow Sash Movement is opposed to the way that the Catholic hierarchy portrays the LGBT Community and they are now speaking out agaisnt the ad hoc committees that the US Council of Catholic Bishops is putting into place. Here is their press release:

All Saints” aka Halloween, is a Holy Day of Obligation in the Roman Catholic Church. The Letter to the Bishops of the Catholic Church on the Pastoral Care of Homosexual Persons, (also known by its opening words Homosexualitatis problema or, disparagingly, as “the Halloween Letter”) is a letter to the Congregation for the Doctrine of the Faith of the Roman Catholic Church written in 1985 and delivered in Rome on 1 October 1986 by then Cardinal Joseph Ratzinger ( Pope Benedict XVI) and Archbishop Alberto Bovone. The letter gave instructions on how the Clergy should deal with and respond to lesbian, gay, and bisexual people. Pope John Paul II approved the letter and ordered its publication.

What does this letter have in common with the recent testimony of Bishop William Lori, head of the newly created ad hoc committee on religious liberty at the US Conference of Catholic Bishops (USCCB), who recently testified before Congress? According to Bishop Lori the Catholic vision of Religious Freedom should be paramount and associated with the Vatican’s perceived threats to religious liberty. Further that action in support of any legislation that promotes equality for Lesbian/Gay People would be an attack a Catholics right to practice his/hers religion. The Rainbow Sash Movement response to such a view is that it is totally unreasonable, un-democratic and homophobic.

Like the 1986 Halloween Letter Bishop Lori promotes the idea that propagation of religious belief as a justification for discrimination against Gay people should be lawful. Both continue to promote the Catholic Church’s condemnation of homosexuality under the guise “Religious Freedom”. This will only result in the corresponding denial of “Religious Freedom” to Gay people as is exampled by the Defense of Marriage Act (DOMA). The Halloween letter did not remove violence against gay people if they try to legalize our rights.

The US Council of Catholic Bishops imperial religious behavior in respect to Gay Marriage has only sought to deny equality and fairness by promoting individual attacks on the rights of gay people generally, on Gay Catholics and their allies specifically. The Bishops seek to promote through the prism of “Religious Freedom” an atmosphere where promoting individual rights of conscience and equal rights for Gay People are somehow at odds with “Religious Freedom” which is a total fabrication of reasonable thought.

Both the Halloween Letter anniversary and Bishop Lori testimony only show how out of touch the bishops are when it comes to the lives of real people. Clearly the Bishops can no longer speak for the Catholic voter on these issues as poll after poll has shown.