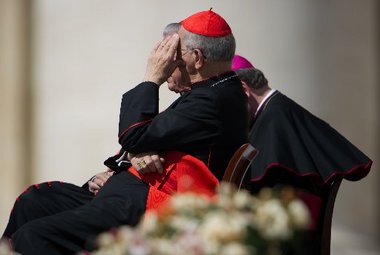 The U.S. Roman Catholic Diocese of Kansas-St. Joseph is reeling from two such high-profile sins.

The pastor of the parish of St. Patrick’s, Rev. Shawn Ratigan, was beloved for his fondness for children and always carried a camera at events at the church and the parish elementary school. In May 2010, the school principal sent a letter to the diocese with concerns that Ratigan’s behaviour fit the profile of a child predator.

The diocese’s vicar general, Monsignor Robert Murphy, spoke to Ratigan about setting boundaries with children but Ratigan continued to attend children’s events, spend weekends with parish families, host an Easter egg hunt and, with his bishop’s consent, preside at a girl’s first communion. He is alleged to have taken lewd photographs during that time.

Last December, a computer technician found hundreds of “disturbing” photos on the priest’s laptop that included nude pictures of girls. He turned the laptop over to the diocese. The next day, Ratigan attempted suicide.

In May of this year, Murphy called the police and the priest was indicted by a federal grand jury. Parents of students and parishioners who had only been told that their priest had fallen sick from carbon monoxide poisoning, were understandably stunned when Ratigan was arrested and charged with three state child pornography counts.

In June he was charged with 13 federal counts of producing, possessing and attempting to produce child pornography. He has pleaded not guilty and remains jailed.

The other side of this sad story, however, is in the “things we should do and don’t” category. The bishop of the diocese, Robert Finn, despite promising three years ago to report suspected pedophiles to police as part of a $10-million US settlement with 47 plaintiffs in sexual abuse cases in Kansas City, has acknowledged that he knew of the priest’s photographs last December but did not turn them over to police until May.

Last Sunday, the bishop urged worshippers to keep the diocese together and avoid discouragement. He has promised to fight the charge. He said in a statement, “We will meet these announcements with a steady resolve and a vigorous defence.”

While Finn admits to knowing about the photographs five months before taking action, he claims that he didn’t read the school principal’s letter dated May 2010 until this past spring.

It is also important to stress, once again, that clergy abuse is only a small portion of the abuse of children at the hands of coaches, teachers and extended family members.

Nevertheless, victims’ groups see this indictment as a step in the right direction where a bishop is held liable for the behaviour of a priest he supervised because he failed to report the priest to authorities.

Regardless of the legal outcome, given the disappointment and anger rampant in his diocese, Finn should, at the very least, resign.

And he should resign now.