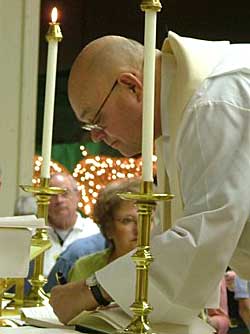 A support group for clergy sex abuse victims is releasing today, for the first time, a detailed, typed, two page admission by a recently “outed” predator priest who spent time in Minnesota.

Leaders of SNAP, the Survivors Network of those Abused by Priests (SNAPnetwork.org) are also handing out flyers urging current and former church officials and members to give police any information they may have about clergy sex crimes and cover.

In May of this year, Fr. Bede Parry was named for the first time in a civil child sex abuse and cover up lawsuit. At that time, Parry admitted his crimes, which took place in western Missouri in the 1980s.

But today, for the first time ever, a two page, single spaced typed confession by Parry is being made public. In it, he says that four men who are now Catholic prelates knew of – but kept silent about – his crimes. They are Bishop Daniel Walsh of Santa Rosa CA, Bishop Joseph Pepe of Las Vegas NV, Dubuque Archbishop Jerome Hanus of Dubuque IA, and Archbishop Robert Sanchez of Santa Fe NM.

It also says that the nation’s highest ranking Episcopalian figure, Presiding Bishop Katharine Jefferts Schori was told of his misconduct. Still, Parry was able to work as music director and priest at All Saints Episcopal church in Las Vegas NV until this May.

The confession was obtained by clergy abuse survivor Patrick Marker who runs a website called Behind the Pine Curtain.

“We’re grateful to Pat for helping to expose this corruption,” said David Clohessy of SNAP. “It’s a shame that victims, not church officials, are the ones who are being forthcoming about clergy sex crimes and cover ups by Episcopalian and Catholic officials.”

The event is being held at 12:30 P.M. today outside the Cathedral of the Immaculate Conception in downtown Kansas City, MO.

SNAP says that the Parry confession shows that cover ups of clergy sex crimes often eventually come to light. So the group is prodding anyone who worked or works for the Catholic church to “come clean now” so that kids will be safer. Specifically, SNAP is urging those with suspicions or information about possible child sex crimes to contact prosecutors in Jackson and Clay counties.