High-profile priest Father Bob Maguire says Australia’s Catholic leader, George Pell, is punishing him for being “open to all” by forcing him to retire from his parish. 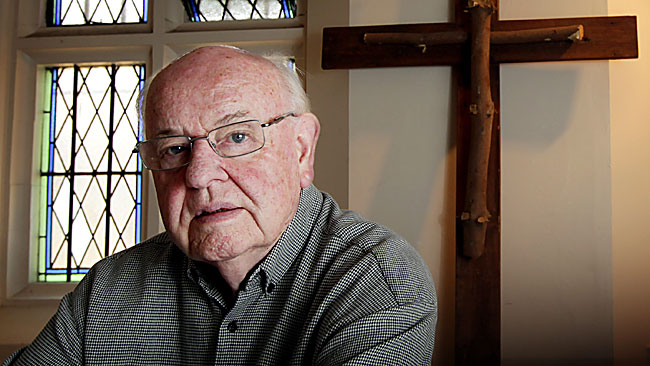 The church has ordered Father Maguire to resign after 38 years as South Melbourne’s parish priest.

Father Maguire, 77, said Cardinal Pell considers his parish a “dog’s breakfast” and described his exit as a “dishonourable discharge”.

“George Pell has declared those of us Vatican II-ists to be Cafeteria Catholics whereas he and his lot are authentic Catholics,” Father Maguire said.

“Well, that’s what we’re being punished for, for being Cafeteria Catholics.

“That means that we’re a bit all over the place like a dog’s breakfast, we live in the real world, we’re open to all, we’re not exclusive, not easily offended, we’re sacrificial, we put ourselves at the service of all kinds of people whether they’re church-going or not.”

Father Maguire, widely known as the co-host of the radio show Sunday Night Safran, will finish at Saints Peter and Paul’s Church in South Melbourne on February 1 next year when the Capuchin Order will take control of the parish.

The Catholic Archbishop of Melbourne, Denis Hart, said Father Maguire will be appointed Pastor Emeritus, saying the position offers him a “broader canvas” to work within the church.

But Father Maguire described the role as a “bullshit title” and said he will seek canon legal advice before considering an appeal to the Vatican.

Archbishop Hart said the parish needed a succession plan and that Father Maguire could still continue to work as a priest in Melbourne.

“We’re not preventing Bob from doing anything, we’re opening out to him possibilities and we are providing the Capuchins who will continue for an extended period … when we’re dead and gone the Capuchins will be there,” he said.

“I am deeply conscious of the day-to-day grinding demands which are there (for a parish priest) and I think that we can best use Bob and his wonderful abilities by providing him with a broader canvas, a bit of freedom, and a broader scope.”

Father Maguire said the move meant he was no longer an active officer within the church.

“Emeritus is the kind of thing where you’re given the flick, I’m taking it as a dishonourable discharge,” he said.

“They use (the title) in academia. It means you are no longer working as an academic, but you still have the title of academic.”