As I was pondering the positive effects of the Occupy Wall Street protests, another local news story caught my eye. The two events may appear to be disparate, but if you consider some interesting parallels, I think they actually complement each other quite well. 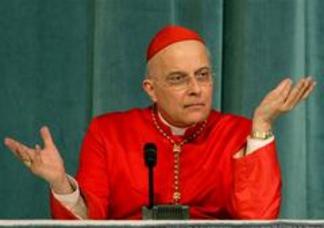 Essentially what I’m saying is, I think it’s time for an “Occupy the Catholic Church” movement.

Of course, whenever I broach this touchy subject, all kinds of cross-wearing folk come out of the woodwork to accuse me of Catholic bashing and being anti-church. Nothing could be further from the truth.

Let’s start with those nine years (including kindergarten) at St. Nick’s. Armed with that education, I waltzed into all honors classes at Evanston Township High school. I was an altar boy, a church reader and volunteered on numerous projects. I still keep in touch with some of the nuns, teachers and priests from that time.

The Jesuits at Loyola University of Chicago put anything the Ivy League can offer to shame. And three of my most prized possessions include two quotes done in calligraphy by one of those nuns, and a cross made out of wood from an old St. Nick’s pew.

Though the thought didn’t come to me in exactly that fashion, at some point I began ascribing to Sting’s notion that, “Men go crazy in congregations, but they get better one by one.”

But despite declaring myself an official ex-Catholic, in no way does that mean I’m minimizing or disowning that heritage. On the contrary—I’m proud of it!

That said, let’s move on to our local news story.

Stopping just short of excommunication, Chicago Cardinal Francis George and his fellow bishops indignantly blasted Gov. Pat Quinn, a Catholic, for presenting a pro-choice PAC leadership award. They said, by “aligning” himself with that group, he was “supporting the legal right to kill children in their mothers’ wombs.”

My first thought was, “When will the church apply that same kind of zero-tolerance religious zeal to themselves?” But instead of going down that road, let’s just move on.

So my second thought was, “Isn’t this man throwing the first stone, the same man who, in the face of a mounting church child-sex-abuse scandal, allowed The Rev. Daniel McCormack to prey on young boys for 14 long years?”

In 1992, two men and one minor accused McCormack of abusing them while he was in the seminary. The subsequent letter placed in McCormack’s file simply “disappeared.”

In 1999, an assistant principal informed the archdiocese that the priest had abused a fourth-grade boy. Though she delivered that letter herself, the archdiocese said they never received it.

In 2003, a woman called the archdiocese to report her grandson was being molested by McCormack. Violating the very policies set forth by the cardinal himself, the archdiocese refused to call the police.

After McCormack was first arrested in August 2005, an independent review board created by the cardinal directed him to remove McCormack from the priesthood. He did not.

Finally, in 2006, 19 long years after that first case of abuse, McCormack was arrested when another parent complained to another principal who had actually had the good sense to go to the police.

And how did the church punish George for his complicit failure to protect children? They named him president of the U.S. Catholic Conference of Bishops. If it were you or me, we’d be sitting in a jail cell.

But back to the present. After the cardinal trashed the governor, it turns out the award wasn’t going to any kind of abortionist, it was being presented to “pre-eminent” rape-victim advocate Jennie Goodman, herself a rape victim at the age of 18.

Goodman, who’s neither had nor encouraged as much as one abortion, a woman who could have justifiably issued a scathing counterattack on the Catholic Church, simply replied, “It hurts for all those people who have been raped.”

That’s certainly a far cry from George’s statement attacking her because the governor was “rewarding those deemed most successful in this terrible work.”

It kind of makes you wonder whether George or Goodman should be the cardinal.

When he finally understood the magnitude of his mistake, just what did the cardinal do? It certainly wasn’t anything as rash as issuing an apology. He stoically claimed he “regrets” that Goodman felt attacked and added, had he been aware of her story, “We may have found another occasion to say something about the governor.”

Ah, yes! Being a Catholic cardinal or bishop means never having to be aware of anything.

Aren’t these the same religious leaders who commissioned the John Jay Report, which blamed the sex-abuse scandal on the ’60s counterculture, the rise of feminism and the tolerance of homosexuality? Let’s not forget that document also claimed priests were only pedophiles if they molested someone under 10 years of age.

Isn’t this the same church that hasn’t punished one bishop or cardinal for their role in a worldwide child-sex-abuse cover-up?

And then Cardinal George attacks a rape-victim advocate. Talk about throwing the first stone …

My first thought was to call on Catholics everywhere to follow my lead and leave a church that so dismally falls short of the expectations they place upon their own flock. But considering all the good the Catholic Church does, I believe that would be the equivalent of throwing the baby out with the bathwater.

And then I remembered the fine example being set by the “Occupy” protestors. In spite of this country’s many faults, they’re not abandoning it, they’re reminding our leaders what made it so great in the first place.

So, I’ve decided to issue this challenge instead. Catholics! Take back your church.