Bishop Robert W. Finn’s five-month delay in reporting to police a priest in possession of child pornography directly led to the abuse of a ten-year old girl, and qualifies as conspiracy to commit fraud, a lawsuit filed today alleges. 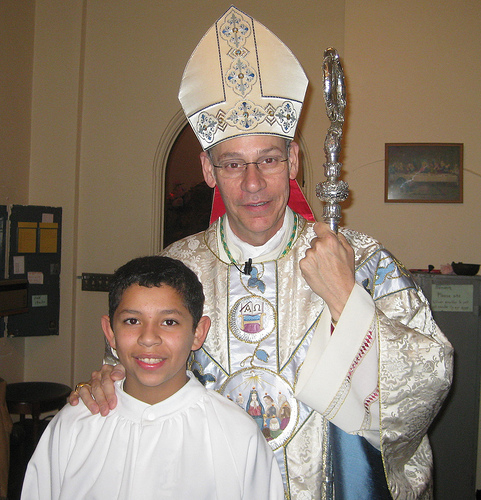 The suit, brought on behalf of the girl by her parents, says that Finn’s delay in reporting diocesan priest Fr. Shawn Ratigan directly placed the girl in harm’s way when her parents invited the priest into their home on several occasions, not knowing of his predilection toward taking lewd photographs of children.

During those occasions, the lawsuit says, the mother and father noticed Ratigan using his cell phone “under the dinner table,” which, the family later learned, he was using to take sexually explicit photos.

The family is now concerned, the lawsuit says, that those photos “may have been distributed…over the internet.”

The home visits came after Ratigan had been removed from parish ministry, but neither the parish nor accompanying school had been notified that lewd photos had been found on the priest’s computer.

The lawsuit, which was brought by the Randles, Mata, and Brown law firm, comes after news yesterday that Finn evaded a second criminal indictment for failing to report suspected child abuse by agreeing to give the Clay County, Mo., prosecutor near-total oversight of his diocese’s handling of sex abuse cases for the next five years.

Finn and the diocese were separately indicted in Jackson County, Mo., in October for failing to report suspected child abuse in the Ratigan case.

A spokesperson for the diocese said in an e-mail that while the suit “includes a number of factual inaccuracies,” the diocese “would like to directly say to the parents of this child, ‘Our concern is for you, your daughter, and your family. We condemn the disturbing and destructive behaviors attributed to Shawn Ratigan.’ ”

The 21-page suit, which names Finn, Ratigan, and the diocese as separate defendants, lays out eight separate counts which the plaintiffs’ lawyers may pursue in court, including charges that the three perpetrated child sex abuse, failed to supervise clergy, failed to supervise children, and conspired to commit fraud.

The suit outlines separate counts of child sex abuse against Ratigan, and the bishop and diocese together. The lawsuit alleges that in not reporting Ratigan to police or parents, the diocese and bishop “stood in the shoes” of the priest and “aided and abetted” his abuse of children between December, 2010, and May, 2011.

Images of naked children were found on Ratigan’s laptop in December, 2010. The Kansas City-St. Joseph diocese learned about the images and removed Ratigan from his parish, but did not report the incident to authorities until May. From February until his May 16 arrest on charges of possession of child pornography, the priest lived at a home for Vincentian priests and serving as chaplain to a neighboring Franciscan convent.

Filed in Clay County, Mo., today’s suit seeks unspecified monetary compensation from the diocese. While the girl and her parents decided to remain anonymous in the suit, Rebecca Randles, the plantiffs’ lead attorney, said Clay County is where the parents live and “where some of the acts took place.”

The diocesan chancery is located in Jackson County, Mo., which brought the criminal indictments against Finn and the diocese Oct. 14. The diocese covers 27 counties in northwest Missouri.

In a phone interview, Randles also said she hopes the lawsuit acts “as a symbol for why its imperative that people who have knowledge warn others when there’s a predator in their midst.”

Today’s suit lays out the timeline in the Ratigan case as has been widely reported. The key addition to the story is how diocesan inaction allegedly led directly to Ratigan surreptitiously taking photos of the girl.

While Finn moved Ratigan to the home for Vincentian priests with orders not to spend time with children in February, after the bishop saw lewd photos on the priest’s laptop in December, the lawsuit says the bishop never warned parents or parishioners about the priest’s tendencies.

After Ratigan’s arrival at the priests’ home, the lawsuit says the priest contacted the young girl through Facebook and also contacted her mother vial e-mail. Some time later, the parents invited the priest to their home to “spend time” with the family. That’s when the lewd photos were taken “under the dinner table.”

The lawsuit also alleges that Ratigan spent time with other families who had “no warning or understanding about Fr. Ratigan’s propensity to photograph and abuse children.”

That possibility was also highlighted in a diocesan-sponsored study of its handling of the Ratigan case released in September.

Specifically cited in that 138-page report, conducted by former U.S. attorney Todd Graves, is a 2011 Easter party hosted by Ratigan at the priests’ residence, at which “several young children were present.”

Today’s suit says the plantiff girl was also present at that party, where her parents believe she was photographed.

Among the counts brought by the plaintiffs in the suit, the most incisive seem to be the charges of conspiracy to commit fraud by the diocese and Finn. The lawsuit alleges that both “misrepresented” information “they had the duty to disclose.”

Finn, Ratigan, and the diocese worked “in concert with each other, with the intent to conceal and defraud, conspired… [to] conceal or fail to disclose information relating to the sexual misconduct of Defendant Ratigan, prohibiting public scrutiny or investigation into his acts of sexual misconduct,” alleges the suit.

Also announced yesterday was news that Ratigan had been indicted by a Clay County grand jury on three counts of possession of child pornography. The indictment supersedes a state criminal complaint that charged Ratigan on May 19. Each of the three counts is a felony punishable by up to seven years in prison.

Ratigan, 45, was also indicted in June by a federal grand jury and is in federal custody.

During a press conference this morning hosted by the Survivors Network of Those Abused by Priests, Barabara Dorris, the outreach coordinator for SNAP, said today’s suit shows, above all, that Finn “should have told parents or parishioners” about Ratigan.

Even if diocesan officials were worried revealing information about Ratigan would unnecessarily scare people, Dorris said “they could have placed him in a facility where he would have had no access to children.”