The Dutch Catholic church has ordered an 81-year-old priest to leave his partner of 46 years or be forced to quit the priesthood, the Den Bosch diocese in the central Netherlands announced Friday. 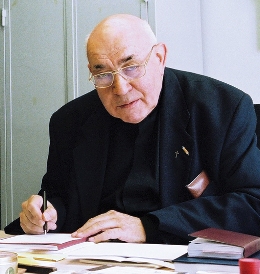 Jan Peijnenburg’s relationship with Threes van Dijck, 85, was unacceptable to other priests, the Church said.

“We are giving him the choice: either he leaves his partner or he leaves the priesthood”, diocese spokesman Michiel Savelsbergh told AFP.

“We cannot allow him to do that which is forbidden to others.”

But Peijnenburg told the daily newspaper AD, through a friend, that the Church had already known of his relationship for about a decade.

In a veiled admission of complicity, the diocese said it had given the ultimatum after a leaflet penned by Peijnenburg criticising priestly celibacy which “confirmed what we knew”.

“Other priests reacted and, as we had had a written confirmation, we couldn’t leave things as they were,” said Savelsbergh.

Catholic priests are forbidden to marry, excepting certain cases where married clergy convert to Catholicism from other religions.

Peijnenburg has until December 1 to decide but, according to the paper AD, his choice is already made: love over religion.

“Naturally I choose Threes. We are staying together,” Peijnenburg said.