A Roman Catholic priest was arrested on charges he viewed child pornography in the rectory of his Pittsburgh-area church, the diocese said on Sunday. 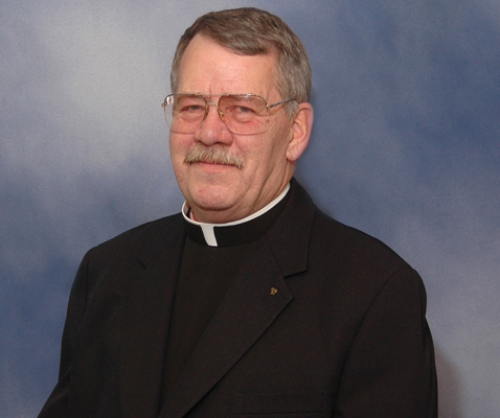 The Rev. Bartley Sorensen, 62, pastor of St. John Fisher Church in Churchill, Pennsylvania, was arraigned on charges of possession of child pornography, a third-degree felony, according to the Diocese of Pittsburgh.

He was being held on Sunday in the Allegheny County Jail in lieu of a $100,000 bond, jail officials said.

Sorensen was arrested after a church employee walked into the rectory on Friday and saw Sorensen viewing a computer image of a young boy naked from the waist down, with the words “Hottie Boys” on the screen, police said. She alerted diocesan officials, who immediately contacted police.

Allegheny County detectives found pornographic images of young boys on his computer, police said. During an interview, Sorensen admitted to possessing at least 100 pornographic pictures of children, police said. He has not been charged with abusing children.

Accusations of child abuse and sexual impropriety against Catholic clergy in the United States have rocked the Catholic Church since 2002, and the church has paid out some $2 billion in settlements to abuse victims.

The pornography arrest also comes amid a series of separate scandals that have seen a steady march of men make abuse accusations in recent weeks against coaches at Penn State University, Syracuse University and most recently against a top official at the Amateur Athletic Union.

The Pittsburgh diocese said in a statement that Sorensen had been placed on administrative leave.

“The viewing of pornographic images involving children is a disturbing and criminal act,” the statement said. “The Diocese of Pittsburgh is cooperating to the fullest extent in the investigation of this incident.”

A priest for 35 years, Sorensen had been a pastor at St. John Fisher only for several weeks, having been previously assigned for nine months to St. Anne Church in Castle Shannon, Pennsylvania. His past includes an assignment as chaplain at West Penn Hospital in Pittsburgh.

The Rev. Ronald Lengwin, diocese spokesman, said the diocese had provided Sorensen with the names of several possible attorneys after his arrest but it was unclear who he had retained for the criminal case.