Washington’s four Roman Catholic bishops have taken a foursquare stand against legalization of same-sex marriage, a cause rapidly gaining momentum in the State Legislature. 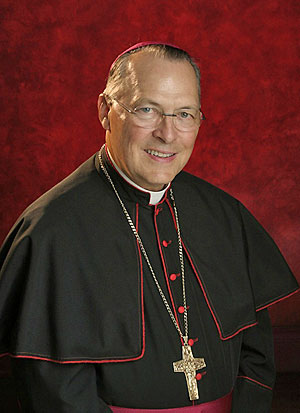 Catholics should contact their legislators and tell them to “defend the current definition of marriage” against legislation to legalize marriage between same-sex couples, the bishops declared in a strongly worded pastoral letter posted late Friday.

Society’s recognition of marriage is “related to bringing children into the world and the continuation of the human race,” argue the bishops, and any change of definition would add “to the forces already undermining family life today.”

“My first reaction, as a practicing Catholic, is that this is very hurtful,” said State Sen. Ed Murray, D-Seattle, chief sponsor of marriage equality. Murray is a gay man in a 20-year committed relationship.

The Catholic bishops root their argument in what they see as the role of procreation in marriage.

“Marriage is certainly about the public recognition of a relationship between a man and a woman,” said the letter. “But it is much more. Marriage in faith and societal traditions is acknowledged as the foundation of civilization.”

The Catholic bishops argue that “civil recognition of marriage” has sought to bestow “on countless generations of children the incomparable benefits of a loving mother and father committed to one another in lifelong union.”

“Were the definition of marriage to change, there would be no special laws to support and recognize the irreplacable contribution that these married couples make to society, and to the common good by bringing to life the next generation.”

The definition of marriage has been undergoing change by courts and legislators. Six states and the District of Columbia have legalized marriage between couples of the same sex. Nine states, including Washington, have extended legal recognition and rights to domestic partners.

Several of the states where same-sex marriage is legal — notably Massachusetts and Connecticut — are heavily Catholic.

Gov. Andrew Cuomo of New York, a Catholic, pushed his legislature to approve same-sex marriage last spring. Another Catholic governor, Martin O’Malley of Maryland, is campaigning for approval. Gov. Jerry Brown of California, a former seminarian, has refused to defend a narrowly passed initiative that rolled back gay marriage.

Catholic bishops in Washington have taken progressive stands on numerous social issues. They have championed the rights of immigrants, defended social programs, opposed the death penalty, and even taken a strong position for restoring decimated Columbia River salmon runs.

But the statement released Friday upholds traditional Catholic teachings, and appeals beyond the faithful.

“Upholding the present definition of marriage does not depend on anyone’s religious beliefs,” the bishops argue. “Washington State’s present law defining marriage as a ‘civil contract between a male and a female’ is grounded not in faith, but in reason and the experience of society.

“It recognizes the value of marriage as a bond of personal relationships but also in terms of the unique and irreplacable potential of a man and woman to conceive and nurture new life, thus contributing to the continuation of the human race.”

The bishops end their letter by calling for practical action, adding.

“We urge you to contact your own State Senator and your two State Representatives to request that they defend the current legal definition of marriage as a union between a man and a woman.”

The letter will be made available — or read — at Saturday vigil and Sunday masses around the state.

The reaction is hard to predict.

Bishops often refer to their “flock,” but American Catholics do not behavie like sheep. An ABC News/Washington Post poll last spring found that 63 percent of Catholics in the U.S. support civil marriage betwen same-sex couples.

In Minnesota, where the Catholic Church is supporting a constitutional amendment entrenching heterosexual marriage, Minneapolis Archbishop John Nienstedy has issued a warning to priests:

“There ought not to be open dissension on this issue. If any have private reservations, I do not wish that they be shared publicly. If anyone believes in conscience he cannot cooperate, I want him to contact me directly and I will plan to respond personally.”

As in New York, the legislation introduced in Olympia Friday would allow churches and clergy full rights in terms of who they choose to marry, and whether to allow marriage on church property.

“As the bill is written, the church would never be forced to marry people of the same sex or divorced people,” said Murray.