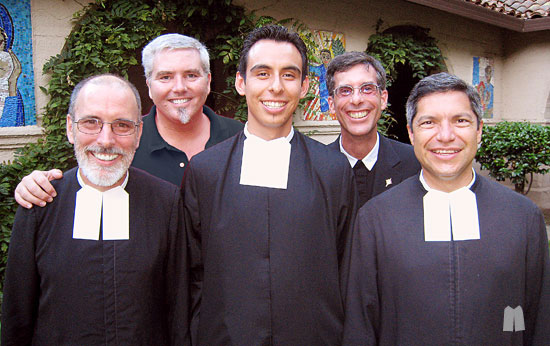 Officials of the law firm of T.O. Gilstrap said the lawsuit alleged that Brother Samuel Martinez abused or molested numerous boys, including the two plaintiffs who filed the suit. It states that the incidents occurred during Martinez’s tenure at the school. He was principal from 1976 to 1985.
Cathedral is a top private Catholic high school for boys in the El Paso region.

The Brothers of the Christian Schools, District of New Orleans-Santa Fe (NOSF), was under contract to run the school at the time.

“The lawsuit, which was filed in Santa Fe in the 1st Judicial District Court of New Mexico, alleged that Brother Martinez sexually abused the plaintiffs while they were students at Cathedral in the late 1970s and early 1980s,” said S. Clark Harmonson, one of the lawyers with the T.O. Gilstrap firm.
The diocese will pay $1.6 million to the plaintiffs.

The Rev. Anthony C. Celino, the El Paso Catholic Diocese vicar general and moderator of the curia, said Cathedral High School was incorporated in 1993 under a nonprofit designation as Cathedral High School Inc. and has a policy on sexual misconduct and safe environment.
“This includes background checks for all employees and those who work directly with students,” Celino said.

“They conduct sexual misconduct and safe environment training for all employees and those who work directly with students. They follow the reporting laws as provided in the Texas Civil Statute.

“Additionally, every year the school designates a day to discuss with all students a student safety awareness with regards to sexual misconduct and manner of reporting to school authorities, should such things occur.”
Celino said Martinez is in a retirement home outside of the El Paso Catholic Diocese and does not function in any ministerial capacity.

Catholic officials apparently had sent Martinez to El Paso after other complaints surfaced against him in another state.

“Allegations of sexual impropriety against Brother Martinez arose in 1971 at a school operated by NOSF Inc. in New Orleans, Louisiana,” Harmonson said.
“(He) was thereafter transferred to Cathedral High School following these allegations and a 100-day stay in Santa Fe at a retreat center operated by a religious order affiliated with NOSF Inc.”

“Part of our claim was for future therapy,” Harmonson said. “We hope and expect our clients to use part of the settlement funds to receive therapy.”
Harmonson said the diocese and the Christian Brothers order had a chance to prevent the abuse but didn’t.

“Instead of taking action then, Martinez was given a 100-day vacation at a retreat center in Santa Fe and then transferred to Cathedral High,” the lawyer said.

“There have been upwards of 10 allegations of abuse against Brother Martinez here in El Paso.”

The Brothers of the Christian Schools had prepared a document in 2004 titled “This safety plan is designed for Bro. SM (Sam Martinez).”

The document said Martinez had spent four months at a treatment center on the East Coast.

“Beginning in 1992, several complaints were raised about his improper behavior with students when he served as principal of a high school,” the religious order’s document said. “These complaints have to do with what allegedly occurred between 1981 and 1985.”

That document said that two other lawsuits were filed against Martinez, in 2004 and 2007, and subsequently settled.

Lawyers for T.O. Gilstrap of El Paso have represented at least 12 people who have made claims against the diocese, as well as survivors of sexual abuse against other religious denominations and institutions, including the Mormon church, the Methodist church, the Assembly of God church, the Boy Scouts of America and hospitals.