Unable to deny his feelings, Father Jim resigns to be with the woman he loves

Like many Roman Catholic men who feel called to the priesthood, the Rev. Jim Hearne wrestled with whether ordination was right for him. 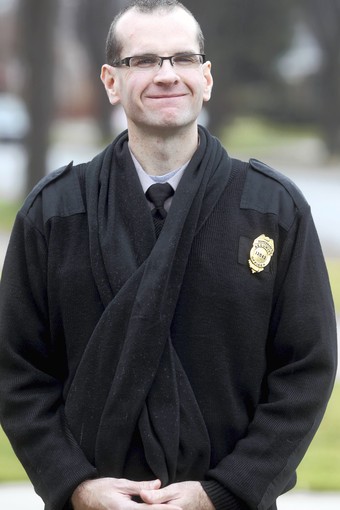 The youngest of seven in an Irish Catholic family, he saw the joy of family life firsthand and never could quite extinguish the desire to one day have children of his own. But spurred to help stem the priest shortage and strengthen the integrity of the cloth, Hearne donned a priest’s collar in 2005 at age 25.

Now he wonders if his six years in the pulpit as “Father Jim” might have been preparation to become Jim, the father. After a six-month leave of absence from St. Giles Roman Catholic Church in Oak Park, Illinois, Hearne decided not to return to the pulpit, but to stay in the pews and pray to one day start a family of his own.

He has no intention of turning his back on Catholicism. Rather, he wants to be more faithful to the church he calls home, and faithful to his feelings.

Hearne has fallen in love.

Hearne’s decision has sent a ripple through the Oak Park congregation, where many parishioners bemoan the Catholic Church’s celibacy requirement and the scarcity of men who want to become priests. Allowing priests to marry would bolster the dwindling ranks, many believe, and enable committed Catholics like Hearne to serve both God and family.

But Hearne’s tale is not about a loss of faith or a clash with church hierarchy. It’s about a man who believes he is following God in an unexpected direction. While he already misses his ministry, he does not resent his church for prohibiting priests from marrying. Celibacy is not necessarily a bad idea, he says.

“I think the spiritual quest or journey is our attempt to understand, freely receive, embrace God’s entering into our life out of pure love,” he said. “Am I to have a family? What kind of work will I do? Will I be seen as an outcast by other members of the clergy and even the cardinal for having left the ministry?”

Hearne doesn’t speak in simple sentences. He delivers sermons. After all, he spent most of his life training to become a priest.

That journey began at the bedside of his dying mother 21 years ago. As he waited for his six older brothers and sisters to arrive at the hospital, priests rotated in and out of the room, offering prayers and comfort to the 11-year-old son and his father.

Hearne believes he saw the best of the priesthood that day.

“I really saw God shining through all those people in a way I hadn’t before and thought: ‘Maybe I could do that. Maybe God is calling me in that direction,’ ” Hearne said.

His older brother John saw Hearne’s vocation then, too. While most of the siblings were angry with God for taking their mother at age 50, their youngest brother remained upbeat, he said.

“When I look back, my brother was probably the strongest of all. We all knew there was something there,” said John Hearne, 45, of Dyer, Indiana. “I believe he saw something that we didn’t: faith.”

He later enrolled at St. Joseph College Seminary at Loyola University, where for the first time in years he attended classes with the opposite sex.

Several fellow seminarians disregarded the prohibition on dating and eventually dropped out of the program. Hearne adhered to the rule, but it was a challenge. When he reached Mundelein Seminary for his graduate work, a veteran clergyman offered some words of wisdom that helped. Every priest falls in love during the course of his priesthood, the clergyman warned.

“You praise God in those moments,” Hearne said. “Just because you have the blackandwhite collar on doesn’t mean you stop having feelings. That’s what he really got across. Now it’s what you do with that love that will determine your course of action.”

Just as seeing the best of the priesthood propelled Hearne toward the vocation, witnessing the worst of the clerical culture by the time he was ordained further fuelled his commitment. While he was still enrolled in Mundelein Seminary, the sexabuse scandal erupted in Boston and spread nationwide.

“It was going to be on my generation of priests to try and somehow, some way restore trust and integrity to the priesthood, remembering that [the] majority of priests are doing what they’re supposed to be doing,” Hearne said.

As an associate pastor at St. James Catholic Church, in Arlington Heights, Illinois, and also at St. Giles, Hearne was popular with young people and heavily involved in the youth ministries.

But as the young priest immersed himself in the daytoday demands of priesthood, he realized he was lonely.

“They can teach you all they want” about celibacy, he said. “You can read all the books about it that have been printed – volumes and volumes. Until you live it and experience it, it’s a far different thing.”

To protect her privacy, Hearne won’t say much about the woman he fell for. But he does acknowledge that it’s serious.

“A man doesn’t leave the priesthood just to date,” he said.

His brother John made sure of it, interrogating the woman the first time they met, to make sure she was equally committed and understood what his brother was willing to give up for her.

Jim Hearne emphasizes that he has “crossed no moral boundaries,” and he still upholds the church’s teaching on chastity.

Unable to deny his feelings any longer, he met with the cardinal last July and requested a leave of absence. Falling in love was not a legitimate reason to leave the priesthood, the cardinal told him, before granting him six months to give his decision more thought.

“Jim is a very fine man. He’s a really good man,” George said. “I hope with God’s grace that it will work out.”

The cardinal also warned him that if he left the priesthood and became a layperson once again, he could not immediately marry in the church – a source of heartbreak for Hearne, who wouldn’t want to marry anywhere else.

“Please know that you have done nothing wrong,” he wrote.

“I love God. I love my faith. I love you. And it is because of this love that I need to do this for myself.”