An indicted Catholic church official is showing signs he won’t take the fall alone for the priest abuse scandal in Philadelphia, with his lawyer saying Wednesday that a successor threw him “under the bus.” 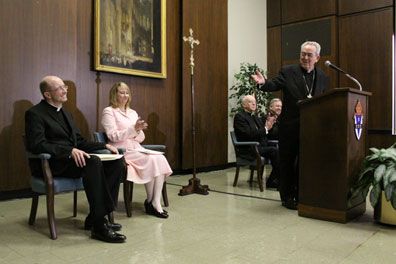 Monsignor William Lynn, 61, is the only official from the Archdiocese of Philadelphia facing trial for allegedly failing to remove accused predators from the priesthood. He served as secretary of clergy from 1992 to 2004.

Defense lawyers argue that Lynn took orders from then-Cardinal Anthony Bevilacqua and other superiors in the church hierarchy.

Prosecutors hope to include dozens of old abuse allegations to show a pattern of conduct at the trial, which is scheduled to start in late March and last several months.

One such case involves a West Chester University chaplain accused in 1994 of taking pictures of students in their underwear.

He next became chaplain of Children’s Hospital of Philadelphia, worked with a parish youth group and later admitted taking boys on overnight trips, one to Jamaica, before retiring to the New Jersey shore, prosecutors said.

When a New Jersey diocese asked the Philadelphia archdiocese about the priest, Monsignor Timothy Senior allegedly wrote in a letter that Lynn, his predecessor, did not fully investigate complaints against the priest.

“Maybe that’s an answer to why Monsignor Senior is not here (as a defendant). He obviously doesn’t mind throwing Monsignor Lynn under the bus,” defense lawyer Jeffrey Lindy argued.

Prosecutors call the archdiocese “an unindicted co-conspirator” in the case. A 2005 grand jury report blasted Bevilacqua and his successor, Cardinal Justin Rigali, for their handling of abuse complaints, but they were never charged. Bevilacqua is now 88 and in failing health.

A judge will hear more arguments Monday on whether 27 of the 63 priests described in that grand jury report can be referenced at Lynn’s trial. Prosecutors want to show that Lynn kept them on the job despite knowing of complaints stored in “secret archives” at the archdiocese.

“I truly would love a jury to see how these were handled,” Assistant District Attorney Patrick Blessington said in court. “The more cases they see … the clearer the picture becomes.”

Although some of the abuse dates to the 1960s through 1980s, before Lynn’s time as secretary for clergy, he had access to the secret files. And many of the cases were not reported until years later, during his tenure.

Defense lawyers hope to limit the trial evidence to Lynn’s handling of the priest and ex-priest on trial with him. The Rev. James Brennan, 48, and defrocked priest Edward Avery, 69, are charged with rape. All have denied the charges.

The archdiocese declined to respond to the comments made Wednesday about Monsignor Senior, citing a gag order in the case.

Lynn is on leave from the archdiocese. Jury selection is set to start next month.