An advocacy group for clergy sexual abuse victims on Wednesday urged the public to continue to contact it despite a judge’s recent order that it release emails and other documents.

Jackson County Circuit Court Judge Ann Mesle required that the Survivors Network of those Abused by Priests (SNAP) and its national director, David Clohessy, produce an extensive amount of correspondence with alleged victims, whistleblowers, journalists and others. 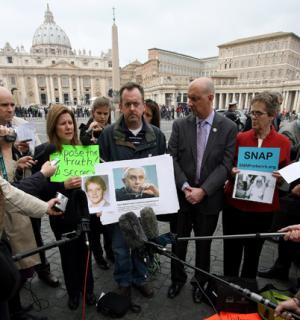 In a news conference in Kansas City, Clohessy declined to comment about the order but said the group was not deterred and is continuing to assist those who say they were abused by clergy, church staff and volunteers.

“Those who call us for help, please keep coming forward and reach out,” he said. “Please don’t be intimidated or bullied, don’t let anything keep you from finding the strength and the courage to report child sex abuse crimes and to get the help that you need.”

Critics have said that SNAP has repeatedly demanded that the Diocese of Kansas City-St. Joseph release certain records but now is not willing to be as transparent with its own documents.

Mesle issued the order in one of five abuse lawsuits filed against the Rev. Michael Tierney since 2010. Tierney has denied any wrongdoing. Diocesan officials said Tierney was removed from all pastoral assignments in June.

he judge’s order also allowed defense lawyers to depose Clohessy. The deposition took place in St. Louis on Monday, and Mesle ordered it sealed on Tuesday.

The plaintiff in the civil lawsuit, identified as John Doe B.P., said he was 13 when Tierney molested him in the 1970s.

Mesle issued a gag order in the case last year, prohibiting attorneys on both sides from making any prejudicial statements. Defense attorneys later accused the plaintiff’s attorney, Rebecca Randles, of violating the gag order by providing SNAP with details of the case that they said SNAP then printed in a news release. They subpoenaed Clohessy and demanded that he turn over the documents involving SNAP as evidence of the gag order violation. Randles has denied violating any ethical rules.