The New York Times reported on the launch January 1 of the new ordinariate (like a diocese, but nation-wide in scope,) for Anglicans wishing to swim the Tiber and become Catholics. (For more about the ordinariate, go here.)

Is this good news or bad news, and for whom? 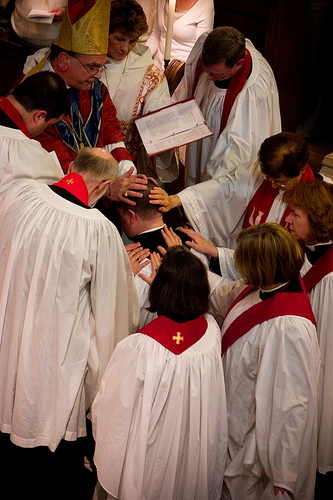 I react with dismay to the perception that these folks were finally motivated to move to Rome because of two issues–ordination of women (which strained the camel’s back,) and the Episcopal Church’s stance of openness to same-sex partnered clergy and laity, (which seems to have been the proverbial last straw.) Sure, some folks were likely wanting to rejoin Rome for some time, but the door’s always been open–it does seem to me that these two issues are the key turning point. The establishment of the ordinariate means that the new RC’s will be able to use a variant liturgy that echoes the Book of Common Prayer, and of course their clergy in this generation may remain married, though future applicants to seminary must promise celibacy like regular Roman priests.

My dismay is that once again the Catholic Church is defined by negation–”Don’t like the idea of women in ecclesial leadership? Come join us! Don’t like gay people? We’re the Church for you!” Along with the US magisterium’s attack on Obamacare because it might involve paying for contraception–”We’re Catholic! That means we’re against the Pill!”–Catholicism is seen as summed up in negative positions. The fact that Episcopal priests need only take an on-line course to qualify for ordination underscores the idea that the point here isn’t educating new clergy in the fullness of Catholic tradition (which is distinct in many ways from Anglican tradition, right??) but in welcoming in people who take the “right” position on these few issues, teach them a few things about liturgical particulars, and they’re good to go.

A point of curiosity is how the wives feel about being tolerated for a generation as an exception. Many, doubtless, believe that clergy should be celibate. Still, the implicit attack on their marriages must sting. “Sure, your husbands are welcome in our ranks, and we’ll let you stay married to them–but no future married priests will be allowed! You wives are a distraction and obstacle!”

And perhaps there’s good news, too. Good news for the Episcopalians, surely, who will continue to celebrate the vocations of women, married men, and partnered gay people with less internal opposition. The message of the Episcopal Church USA as a place of welcome for those disdained by Rome will be more clear than ever. I’m curious about the magnitude of the reverse flow of RC’s who have moved to the ECUSA–I suspect that far more are swimming the Tiber in the opposite direction than are swimming toward Rome. I know some very good people who are now Episcopal laity or clergy, and lots of Protestants, too. I’ve been in churches where half the congregation (by the pastor’s estimate,) are former RC’s.

A final point–the one-two punch of rejecting women’s ordination and excluding gays as defining why people would become Catholic should remind Catholics that those of us concerned about the role of women and concerned about attitudes toward gay people in our Church are natural allies. The issues facing the two groups are not the same, to be sure. Women are not described as “disordered,” nor are women described as a threat to society should they marry. On the other hand, women with vocations to priesthood cannot “pass” in a hostile Church the way gay men can. And there are other points of difference. But still–let’s remember and cultivate those natural alliances of all those regarded as outsiders in the Roman Church, yet remain Catholic nonetheless.