About 550 people are asking for restitution for alleged sexual abuse by clergy in the Archdiocese of Milwaukee — more than in any of the other U.S. dioceses that have filed for bankruptcy protection, according a lawyer involved in the Milwaukee case. 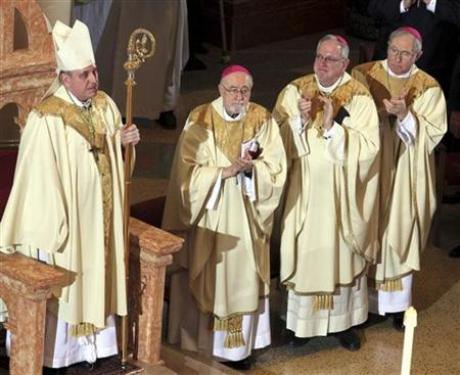 The archdiocese has paid more than $30 million in settlements and other court costs related to alleged clergy abuse. More than a dozen sex abuse suits against it have been halted because of the bankruptcy proceedings. They include allegations against a priest accused of abusing some 200 boys at a suburban school for deaf students from 1950 to 1974.

James Stang, a bankruptcy lawyer who represents creditors in the Wisconsin case, estimated about 550 claims had been filed by the Wednesday afternoon deadline set by the bankruptcy court.

Those who filed claims will end up splitting a settlement amount that will be determined by the creditors’ committee, archdiocese and its insurance company. The archdiocese had only $4.6 million in assets to be applied to claims in 2010.

A victims advocacy group called the number of filings “extraordinarily tragic,” but said that represented only a small portion of people abused by clergy.

“It’s sad and it just shows how devastating these crimes have been on this community but it’s obviously far from over,” said Peter Isely, the Midwest director for the Survivors Network of those Abused by Priests.

The other seven Catholic dioceses in the U.S. that have filed for bankruptcy since the clergy abuse scandal erupted in 2002 in Boston are in Davenport, Iowa; Fairbanks, Alaska; Portland, Ore.; San Diego; Spokane, Wash.; Tucson, Ariz.; and Wilmington, Del. Two other religious orders have also filed for bankruptcy.

Of the seven other dioceses that also filed for bankruptcy, the number of claims ranged from about 40 to 250, Stang said. About 535 claimants had come forward against the Oregon Province of the Jesuits, he said.

Archdiocese spokeswoman Julie Wolf and attorney Jeff Anderson, who represents clergy abuse victims, including some in the Milwaukee case, said it’s hard to compare cases. Anderson said each diocese represents a different number of people, and Wolf said some dioceses are incorporated differently.

Payouts in the other bankruptcy cases have varied based on the severity of the abuse and the quality of the diocese’s insurance coverage, according to Stang. For example, cases in Southern California yielded an average of about $1.2 million per claimant, he said, while the amount was far less in Fairbanks, Alaska, where less money was available.

Stang predicted the payouts wouldn’t be on the generous side in Wisconsin. The creditors committee, archdiocese and its insurance company will negotiate a dollar amount. After that, those who filed claims will negotiate between themselves on how to divide the money.

“Insurance-coverage issues in Milwaukee cases haven’t been very good for survivors,” he said. “The rulings by courts there have not been survivor-friendly.”

Stang acknowledged some people file claims even though they weren’t abused but said that was “extremely rare.”

“Most people are not willing to come out and publicly say they were masturbated by someone,” Stang said.

Anderson and the archdiocese both said they advertised the deadline both locally and nationally.

Anderson said his firm paid for TV and newspaper advertisements because he didn’t think the archdiocese’s efforts made the victims feel safe coming forward.

Wolf disputed that. “We’ve just been focused on getting this message out far and wide to as many people as we could in order to make sure everybody who had a claim was able to submit it before this deadline occurred,” she said.

A Feb. 9 court hearing is set for a judge to consider a request from the archdiocese to throw out some claims by people on grounds they were filed beyond the statute of limitations, they involved someone who was not an archdiocese employee or involve a victim involved in a prior settlement.

Wolf said she didn’t know how many of the claims would be included in the request.