The squabble over whether Catholic social service institutions, universities and hospitals must offer insurance covering contraception under the new health plan contains a subplot with roots deep in history. 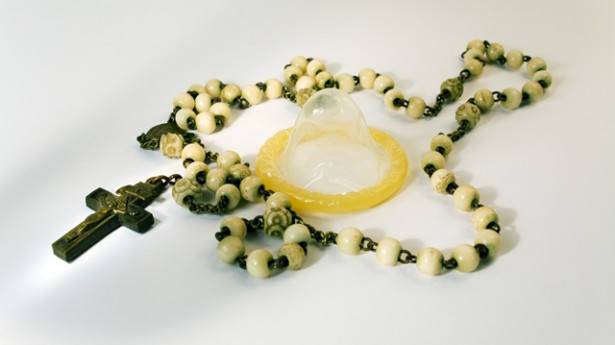 It’s the relationship between women and organized religion — a relationship that, over the centuries, has been hostile to the aspirations of women for a larger role in the family, the world and religion itself.
A little history is needed here.

Women — as well as men — have, through the ages, experienced the same spiritual stirrings that give rise to faith and firm religious beliefs. But organized religion, with its churches, synagogues, mosques, feasts and rituals, has, from the beginning, been exclusively the creation of men.

Moreover, the bureaucracies that have grown up to run these religions — and to promulgate their codes of moral right and wrong — have, from the beginning, been the work of men. Women had little or no say in this overarching influence in their lives.

Here’s one conservative religious view of woman’s role as expressed by A.H. Strong, president of the Rochester Theological Seminary, in a mid-19th century essay: “She is subject to man,” he wrote. “She is to be helper, not principal. Man has preference in creation, woman is made of man and to supply the felt needs of man.” (How nice for man.)

Even in the modern world, women occupy a subordinate role. Some fundamentalist or ultra-orthodox sects even prohibit women from worshiping in the same room with men. In some Islamic lands, women can’t leave home unless accompanied by a male relative, a rule enforced by “religious police.”
Organized religion, in short, has been a clerical stag party.

It is against this historical background that the tussle between what religious conservatives see as a First Amendment right and many women see as a health issue will be played out over contraceptive coverage.

The marginalization of women is just one characteristic of most major religions. The other, in one degree or another, is authoritarianism. They are not democratic institutions.

Their leaders don’t care much for doctrinal dissent. And they have a point. Why should they give any heed to dissent if they believe they’re following the divine will, that they’re doing God’s work? How can they be wrong?

In centuries past, dissent was punished by imprisonment, torture, even death. The Gnostics, who broke from Catholicism in its early days, were persecuted for several heresies, including a belief that women were, in God’s great plan, the equal of men. (Whatever gave them that idea?)

Some extreme Islamic sects still stone women to death even today, especially for adultery. (Men get a pass on this one.) Similar punishments are meted out by some Hindu extreme fundamentalists.

Something about women having sex for the sheer joy of it seems to unhinge the ultrareligious mind, even here in the West where things are better for women but not exactly benign.

Which brings us to the dust-up over requiring religious organizations to pay for contraception despite their doctrinal objection.

Opposition to contraception in this scientific age seems medieval. Maybe so, but it’s a matter of religious freedom and belief, the Catholic bishops insist. It’s also a political issue for the church.

The Catholic church must oppose contraception if it’s to keep faith with its true believers, especially women who have lived by that rule for generations despite the hardship it often imposed. This is the church’s most devoted constituency — its base, so to speak.

Trouble is, even Catholic leaders know a majority of Catholic women today violate the contraception ban. They’ve seen the polls. And they must appreciate that widespread scorning of this rule can ultimately undermine clerical credibility on other religious matters, especially with the church’s younger, more questioning adherents. But the bishops are trapped in church history.

The Obama administration’s handling of the issue was incredibly clumsy and insensitive. Therefore, it owed bishops a way out, which it tried to do with an about-face Friday on its contraception insurance edict. For their part, the bishops, like conservative clergy in all religions, have got to get off the dime and begin bringing women into the dialogue about dogma.

This is a clash that never should have happened. Then again, considering how organized religion has historically ignored or marginalized women, maybe it had to happen.