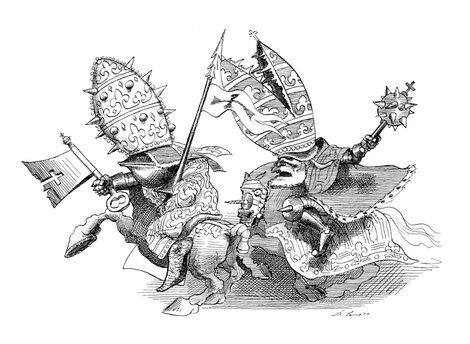 COMMENTARY
By a revolting combination of con men and fanatics, the current primary race has become a demonstration that the Republican party does not deserve serious consideration for public office. Take the controversy over contraceptives. American bishops at first opposed having hospitals and schools connected with them pay employee health costs for contraceptives. But when the President backed off from that requirement, saying insurance companies can pay the costs, the bishops doubled down and said no one should have to pay for anything so evil as contraception. Some Republicans are using the bishops’ stupidity to hurt the supposed “moderate” candidate Mitt Romney, giving a temporary leg up to the faux naïf Rick Santorum; others are attacking Barack Obama as an “enemy of religion.”

Pusillanimous Catholics—Mark Shields and even, to a degree, the admirable E. J. Dionne—are saying that Catholics understandably resent an attack on “their” doctrine (even though they do not personally believe in it). Omnidirectional bad-faith arguments have clustered around what is falsely presented as a defense of “faith.” The layers of ignorance are equaled only by the willingness of people “of all faiths” to use them for their own purposes. Consider just some of the layers:

The bishops’ opposition to contraception is not an argument for a “conscience exemption.” It is a way of imposing Catholic requirements on non-Catholics. This is religious dictatorship, not religious freedom.

Contraception is not even a religious matter. Nowhere in Scripture or the Creed is it forbidden. Catholic authorities themselves say it is a matter of “natural law,” over which natural reason is the arbiter—and natural reason, even for Catholics, has long rejected the idea that contraception is evil. More of that later; what matters here is that contraception is legal, ordinary, and accepted even by most Catholics. To say that others must accept what Catholics themselves do not is bad enough. To say that President Obama is “trying to destroy the Catholic Church” if he does not accept it is much, much worse.

To disagree with Catholic bishops is called “disrespectful,” an offense against religious freedom. That is why there is a kind of taboo against bringing up Romney’s Mormonism. But if Romney sincerely believed in polygamy on religious grounds, as his grandfather did, he would not even be considered for the presidency—any more than a sincere Christian Scientist, who rejects the use of medicine, would be voted for to handle public health care. Yet a man who believes that contraception is evil is an aberrant from the American norm, like the polygamist or the faith healer.

The opposition to contraception has, as I said, no scriptural basis. Pope Pius XI once said that it did, citing in his encyclical Casti Connubii (1930) the condemnation of Onan for “spilling his seed” rather than impregnating a woman (Genesis 38.9). But later popes had to back off from this claim, since everyone agrees now that Onan’s sin was not carrying out his duty to give his brother an heir (Deuteronomy 25.5-6). Then the “natural law” was fallen back on, saying that the natural purpose of sex is procreation, and any use of it for other purposes is “unnatural.” But a primary natural purpose does not of necessity exclude ancillary advantages. The purpose of eating is to sustain life, but that does not make all eating that is not necessary to subsistence “unnatural.” One can eat, beyond the bare minimum to exist, to express fellowship, as one can have sex, beyond the begetting of a child with each act, to express love.

The Roman authorities would not have fallen for such a silly argument but for a deep historical disrelish for sex itself. Early Fathers and medieval theologians considered sex unworthy when not actually sinful. That is why virgin saints and celibate priests were prized above married couples. Thomas Aquinas said that priests must not be married, since “those in holy orders handle the sacred vessels and the sacrament itself, and therefore it is proper (decens) that they preserve, by abstinences, a body undefiled (munditia corporalis) (Summa Theologiae, Part 3 Supplement, Question 53, article 3, Response). Marriage, you see, makes for defilement (immunditia). The ban on contraception is a hangover from the period when the body itself was considered unclean, as Peter Brown overwhelmingly proved in The Body and Society (1988).

Catholics who do not accept the phony argument over contraception are said to be “going against the teachings of their church.” That is nonsense. They are their church. The Second Vatican Council defines the church as “the people of God.” Thinking that the pope is the church is a relic of the days when a monarch was said to be his realm. The king was “Denmark.” Catholics have long realized that their own grasp of certain things, especially sex, has a validity that is lost on the celibate male hierarchy. This is particularly true where celibacy is concerned.

There was broad disagreement with Pius XI’s 1930 encyclical on the matter. Pope Paul VI set up a study group of loyal and devout Catholics, lay and clerical, to make recommendations. The group overwhelmingly voted to change the teaching of Pius XI. But cardinals in the Roman Curia convinced Paul that any change would suggest that the church’s teachings are not eternal (though Casti Connubii had not been declared infallible, by the papacy’s own standards).

When Paul reaffirmed the ban on birth control in Humanae Vitae (1968) there was massive rejection of it. Some left the church. Some just ignored it. Paradoxically, the document formed to convey the idea that papal teaching is inerrant just convinced most people that it can be loony. The priest-sociologist Andrew Greeley said that Humanae Vitae did more damage to the papacy than any of the so-called “liberal” movements in Catholicism. When Pius IX condemned democracy and modern science in his Syllabus of Errors (1864), the Catholic historian Lord Acton said that Catholics were too sensible to go crazy every time a pope does. The reaction to Humanae Vitae proves that.

Rick Santorum is a nice smiley fanatic. He does not believe in evolution or global warming or women in the workplace. He equates gay sex with bestiality (Rick “Man on Dog” Santorum). He equates contraception with the guillotine. Only a brain-dead party could think him a worthy presidential candidate. Yet he is praised by television pundits, night and day, for being “sincere” and “standing by what he believes.” He is the principled alternative to the evil Moderation of Mitt Romney and the evil Evil of Newt Gingrich. He is presented as a model Catholic. Torquemada was, in that sense, a model Catholic. Messrs. Boehner and McConnell call him a martyr to religious freedom. A young priest I saw on television, modeling himself on his hero Santorum, said, “I would rather die than give up my church’s principles.” What we are seeing is not a defense of undying principle but a stampede toward a temporarily exploitable lunacy. Acton to the rescue!