It was Nov. 5, 2006, and she was contributing to Mass at St. Joseph’s Catholic Church in Madison as a lay person, reading Bible passages from the lectern. 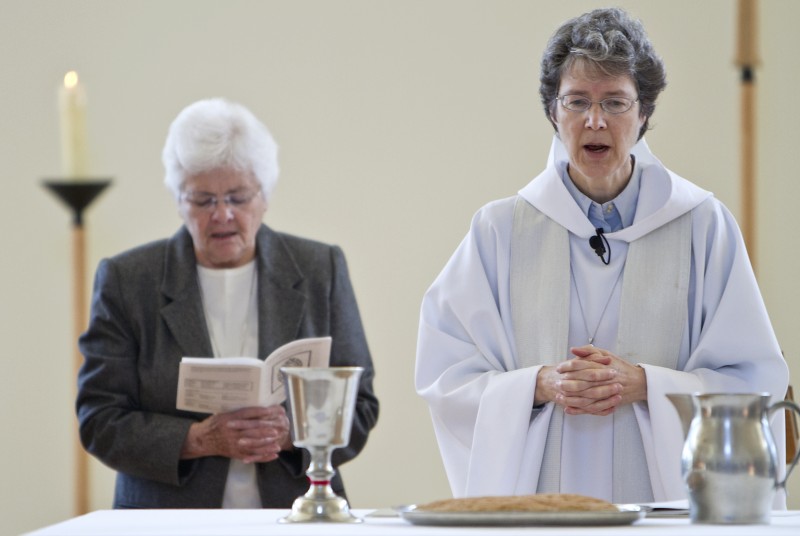 The same day, Madison Bishop Robert Morlino required all priests to play a recorded message from him explaining his position on three issues state residents would vote on that week, including a ban on same-sex marriage, which he supported.

When the priest hit “play,” Jenson walked out.

“It was the first time I’d ever outwardly gone against what I was raised to follow,” said Jenson, 67.

She found a new religious home at Holy Wisdom Monastery, a former Roman Catholic monastery in the town of Westport, just outside Madison. Its Sunday service, offered by the sisters who live there, retains many elements of a traditional Catholic Mass but diverges in sometimes startling ways.

Women can lead the service and preach the sermon. Gay relationships are warmly embraced. All parishioners, not just Catholics, can consume the communion wine and bread because the service is ecumenical, meaning welcoming of all Christian traditions.

It’s an alternate universe of sorts — what some think a Catholic Mass might look like today if the liberal spirit of Vatican II in the 1960s had taken root and flowered.

“We’re doing what the hierarchical church was afraid to complete,” said Jim Green, a longtime Holy Wisdom parishioner who is gay and describes himself as “a Catholic in exile.”

The service, called Sunday Assembly, is attended by people from many denominational backgrounds but has become especially popular with Catholics displeased with Morlino or church doctrine in general. Membership doubled in five years to 335, and parishioners estimate a majority are Catholics who left their regular parishes.

Detractors say the parishioners strayed too far from Catholicism to warrant the label.

A little history: In the 1950s, a group of Benedictine nuns opened a high school at the site for girls in the Madison Catholic Diocese. Benedictines belong to a monastic religious order regulated by the canon law of the Catholic Church. Masses at the site were led by Catholic priests, often provided by the diocese.

In 1966, the nuns closed the school and turned the buildings into a Christian retreat center. The sisters, spurred by the Benedictine tradition of hospitality, gradually made the service more inclusive to all Christians. Lay people, especially women, took on greater roles.

In 2000, the Benedictine sisters went a step further, welcoming a Protestant woman to live with them. “When we chose to open our community to Protestant women, it meant other doors closed,” said Sister Mary David Walgenbach, the monastery’s head.

The sisters sought independence from the Catholic Church, and the Vatican granted it in 2006. Consequently, they no longer are tied to the local diocese. They remain affiliated with a Benedictine federation, but they have a special status, not a full membership, because of their ecumenism.

Bishop’s request
When the sisters disassociated from Rome, Bishop Morlino asked them to no longer celebrate Mass at the site so as not to cause confusion, said Brent King, a diocesan spokesman.

“Many people had visited (the monastery) over the years, and the bishop felt it would take time for people to understand that it was no longer a Roman Catholic institution,” King said, adding the bishop “was in no way unfriendly toward their desire to start a non-Catholic ecumenical community.”

“You wouldn’t know it wasn’t a Catholic church, except for the person officiating,” said parishioner Pat Hobbins-Kemps, 64. A lifelong Catholic, she said she left her regular parish partly out of a lack of opportunities for women to lead.

Finding a home
Trisha Day, 66, said she came to Holy Wisdom after growing tired of sermons that focused on politically charged issues such as abortion and homosexuality while saying little about social justice and the poor.

Jeanne Marquis, 68, found Holy Wisdom after the terrorist attacks of Sept. 11, 2001. “I needed someone to talk about forgiveness instead of retaliation,” she said. “I needed a place where I was encouraged to ask questions.”

Ann Baltes, 44, a lifelong Catholic, said she sought a place where she and her husband, Bill Rosholt, a Lutheran, could participate in communion together.

Are these parishioners still Catholic? The answers vary.

Jenson says she’s not. “Too much divides us.”

Day calls herself “a transitional Catholic,” unsure where she’ll end up. Green said his Catholic identity can’t be taken from him. “The church is the people of God, not the institution,” he said.

Joanne Kollasch, one of the three Benedictine sisters who live at the monastery, said she “is a Catholic and will remain a Catholic,” adding, “I don’t like to be thought of as less Catholic because I’m ecumenical.”
Said Walgenbach: “The Catholic spirituality is bigger than the Roman Catholic Church.”

Both sisters said they respect the Catholic Church and Morlino and don’t seek controversy.

Detractors
Syte Reitz, a member of Madison’s Cathedral Parish who blogs about Catholic issues, said disaffected Catholics are free to start their own churches, but they shouldn’t confuse people by suggesting they still are faithful Catholics.

“Does it matter whether they are errant Catholics or not Catholics?” asks Reitz. “No matter what we label them, the laws of right and wrong and of morality still stand, and they and others will suffer from the mistakes that they make.”

Reitz said because a male priest is not presiding over the Eucharist, the bread is not being turned into the body of Christ, thus depriving attendees of the Catholic Church’s central sacrament.

King, the diocesan spokesman, said for Catholics to fulfill their obligation to attend Mass on Sundays, they must attend a Catholic Mass validly offered by an ordained Catholic priest.

Does the Holy Wisdom service qualify?

“In charity, we must respond that it does not,” he said.