You cannot be a woman and a Catholic without having a stiff set of blinders to screen out so much about the church that makes women fourth-rate participants. 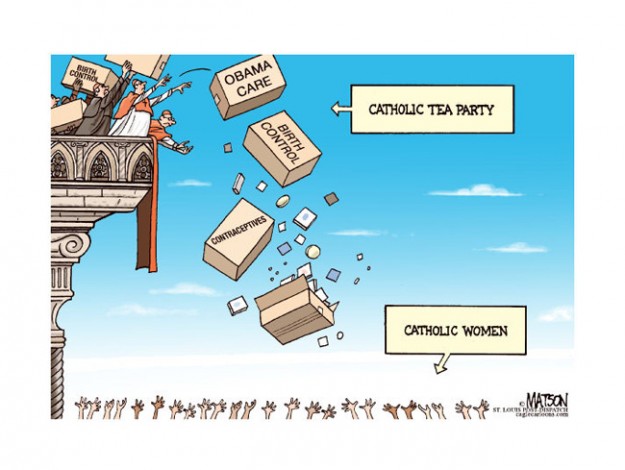 The Catholic hierarchy operates in a bubble, reconfirming at every opportunity that these men have no awareness of how most Catholics live their lives.

The ruckus over the new health insurance law and contraception is just the latest and loudest example. Never mind that reputable surveys show 98 percent of American Catholics have used birth control, the official church rushes to the barricades, determined to keep reality at bay.

Never mind that the health insurance provision that caused this trumped-up outrage would not force Catholic hospitals or other religious institutions to dispense birth control. That would have been wrong, but that was not the case. The stipulation in the new health care law is that insurance companies will provide birth control to women at no cost. That meant insurance plans offered by religious-affiliated institutions would have to include the birth control provision. The link between the Catholic Church and federal government is that most large Catholic institutions – hospitals and universities – accept federal money for research or services.

The Catholic Church position on birth control would be harder to swallow if it did not have such disastrous results: It condemns the poor in Africa and Latin America to wretched lives in which children, at best, face a future of deprivation and at worst die within a few years of birth. Where is the compassion? The poor we may always have with us but it is painful to observe the church’s active role in perpetuating poverty.

Here in the United State the church rages against abortion while crusading against family planning in general and the organization Planned Parenthood in particular. The illogic of this position – given that family planning is the easiest, cheapest way to prevent abortion – is of no consequence to church leaders, none of whom will ever have a conversation with a gynecologist. Theirs is a unique set of blinders.

The contraception flap was a godsend to the Republican presidential candidates, coming as it did just when economic indicators showed the economy continuing to improve. Mon Dieu! Good news – what’s an angry candidate to do? One-up the Catholic bishops by accusing the president of “waging war on the Catholic Church,” as Newt Gingrich did with relish.

This is the same twice-divorced Gingrich who was baptized into the Catholic Church in 2009 by no less than the Archbishop of Washington, Cardinal Donald Weurl. Newtie discovered Catholicism some years after discovering his then-mistress Callista, which happened at the time he was married and flogging President Clinton for discovering Monica Lewinsky. I don’t know whether Cardinal Weurl was among the church leaders who had called for denying Communion to Democrats Ted Kennedy and John Kerry – both divorced Catholics. But consistency is a fleeting thing with the Catholic hierarchy, especially where politicians are concerned.

The White House had little choice but to find a compromise that would calm the furor so it decided insurance companies would pay for birth control if women getting their medical coverage at a Catholic institution asked for it. Predictably, the more hard-line bishops continue to see red.

It’s fascinating to watch these men assert themselves so authoritatively as arbiters of personal morality when the fallout from the sex abuse scandal is still very much with us. Church leaders would like to think that’s ancient history but it’s not. Because most priests are good men who were not involved, I and other Catholics are sticking with the church, believing the same horrific actions will not occur again. But the anger over what happened – the enabling and concealing of crimes against children – simmers just below the surface.

Amid the howls over the contraception dispute, little attention was paid last week when one of the best-known American cardinals, Edward Egan, former bishop in Bridgeport and archbishop in New York, said he regretted his 2002 apology for what happened in Bridgeport. Egan, 79 and retired, now says, “I don’t think we did anything wrong.” And he maintains the church in Connecticut has no obligation to report sex abuse allegations to authorities.

This is stunning. It not only reopens wounds for dozens of Bridgeport victims but also reveals once again how impossible it is for some men of the cloth to acknowledge their responsibility in the real world and, most especially, to the law.

Those Republicans, including Sen. Scott Brown – who had better sense on the issue as a state senator – who think they can convert a woman’s health issue into a question of religious freedom are underestimating the good sense of the public at large, just as the Catholic bishops do.