The Episcopal bishop in Western Washington, in sharp disagreement with Catholic prelates, believes that same-sex marriage is “a conservative proposal” that should be adopted “not only in our society but in our church.” 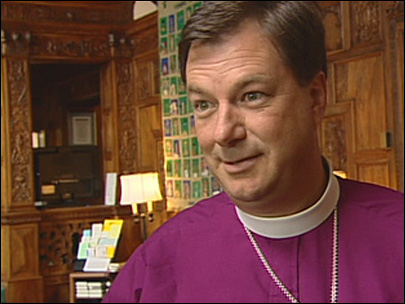 “It seems to me we have held our gay and lesbian brothers and sisters in a Catch-22,” the Rt. Rev. Greg Rickel, Episcopal bishop of the Diocese of Olympia, argues in a blog post published without fanfare to the diocesan website.

“We say they cannot live up to our values because they cannot be married or even blessed in their union,” writes Rickel.

“While many of them have begged for this, it is still not possible. What they ask of us, the church and the government, is to put boundaries around their relationship, to hold them in the same regard and with the same respect, which would also mean that we expect the same from them.”

The Episcopal Church has wrestled with the issue of “inclusion” over years, gradually moving to accept gay and lesbian clergy — two of whom have been elected as bishops — and to provide rites for same-sex couples. Bishop Rickel predicts marriage equality with be approved at the church’s upcoming General Convention.

Parishes have withdrawn from the Episcopal Church — often generating litigation over church property — and the dioceses of Pittsburgh, Fort Worth and San Jaoquin proclaimed themselves Anglicans and severed ties with the parent church. A few parishes, and one prominent Episcopal bishop, have joined the Catholic Church.

Washington’s four Catholic bishops issued a strong appeal, two weeks ago, that the Legislature maintain the current definition of marriage as between a man and a woman. Seattle Archbishop J. Peter Sartain, in testimony to the Washington state Senate, warned of “the grave challenge this legislation poses to the common good.”

“Christianity has held, when considering relationships of all sorts — but especially in relation to two people in marriage — fidelity to be our value,” writes the Episcopal prelate. He depicts marriage equality as an action in furtherance of the common good.

“To me, this is a conservative proposal. I am for it, and I hope we will finally make way for this to happen, not only in our society, but in our church.”

The Washington state Senate passed marriage equality legislation on a 28-21 vote Wednesday night. The state House of Representatives has scheduled a hearing on the measure for Monday morning. House approval is considered likely.

Gov. Chris Gregoire, a Catholic, supports the legislation and promises to sign it into law. Opponents have vowed to collect the needed 120,577 valid voter signatures to force a referendum in the November election.

Washington would be the seventh state to legalize same-sex marriage.