A disgraced Harlem priest who arranged Pope Benedict XVI’s 2008 Mass at Yankee Stadium has been sentenced to “a life of prayer and penance” by the Vatican for his alleged molestation of up to 10 kids decades ago. 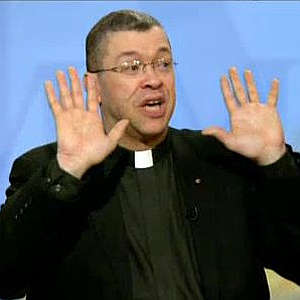 Zwilling pointedly said that Harris — once the archdiocese’s top-ranking black priest and chairman of the senate representing all of the archdiocese’s priests — is not living in a location near families, and is barred from ever publicly acting as a priest.

In 2008, Harris, 64, both gave the invocation at former Gov. David Paterson’s and arranged for the Pope’s triumphant Mass in Yankee Stadium.
But months later, he was suspended from St. Charles Borromeo by the archdiocese after two men claimed he had molested them at the now-closed Cathedral Preparatory High School and College in the 1980s. Seven more men — including a retired NYPD cop — later made similar accusations against him to the Manhattan DAs office.

No charges were ever brought because the statute of limitations had expired.
But in 2010, Harris officially resigned and was barred by Dolan from presenting himself publicly as a priest.

Recently, the Vatican’s Congregation for the Doctrine of the Faith, approved the recommendation of the archdiocese’s review board and assigned Harris to “a life of prayer and penance.”
“He did not fight it,” Zwilling said.
That ruling was first reported by Catholic New York, the archdiocese’s official newspaper.

The Congregation’s action fell short of laicizing — commonly called defrocking — Harris, which would have totally stripped him of his priesthood and returned him to lay status.

By leaving him technically a priest — albeit one who can only say Mass for himself — the Congregation kept him under the direct authority of Dolan, whose orders he must obey or face further discipline.

Robert Hoatson, a former New Jersey Catholic priest who has been a harsh critic of the church’s handling of child sex-abuse cases, blasted the decision, saying, “Msgr. Wallace Harris should be defrocked by the Vatican and Cardinal-designate Dolan should petition the Holy Father to do so.”
“The many victims who have already come forward to report their abuse by Harris deserve better,” Hoatson said. “By relegating Harris to a life of prayer and penance, the Vatican is sending a message that he will never truly be held accountable for his extensive and despicable abuse of young men.”