Pope Benedict XVI will place red hats on the heads of 22 new cardinals on Saturday amid an atmosphere of scandal-mongering, rumour and media leaks from inside the Vatican. 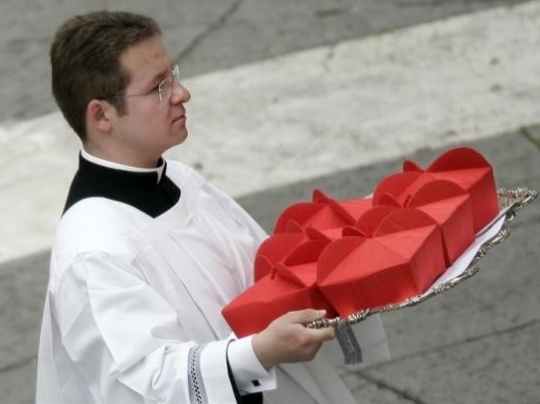 The leaks concern alleged internal divisions and even malpractice among the senior bishops and cardinals at the heart of the Roman Catholic Church.

Most of the new cardinals will be granted the right to take part in the election of Pope Benedict’s successor.

It is the fourth Vatican Consistory since Benedict was elected Pope seven years ago, and is being held to bring the College of Cardinals to its full electoral quorum of 120, after deaths and age disqualifications depleted its numbers.

It must be the world’s oldest exclusively male club – the average age of members is 78.

The Italian contingent will grow to almost a quarter of the total – more than that of any other country and making it more likely that the next pope will be Italian, after the choice of a Pole and Benedict – a German – in recent decades.

The Pope’s Italian aide, Cardinal Tarcisio Bertone, has been instrumental in pushing Italians for promotion.

Key appointments among the new cardinals are the Archbishop of New York, Timothy Dolan, and the Bishop of Hong Kong, John Tong Hon.

During Saturday’s ceremony Pope Benedict is due to announce the date for the canonisation of the first Native American saint, a Mohawk girl called Kateri Tekakwitha who lived in the 17th Century.

Corruption allegations
In the run-up to this Consistory it emerged that the Pope’s current ambassador (nuncio) to the United States, Archbishop Carlo Maria Vigano, had written to the Pope confidentially last March, alleging corruption, nepotism and cronyism inside the office where he worked.

Elderly men dominate the College of Cardinals
Nepotism is a word charged with heavy meaning inside the Vatican. For centuries popes were accustomed to appoint their own nephews as cardinals, sometimes when they were only in their teens.

Archbishop Vigano’s letter was leaked by an Italian investigative journalist during a TV transmission on the independent Italian Channel La Sette. The Vatican has not contested that the letter is genuine.

Another leak concerns attempts by the Holy See to combat suspicions of money-laundering by the Vatican Bank.

Published by the Italian newspaper Il Fatto Quotidiano, which has consistently reported on alleged suspicious transactions at the bank, the document bears the signature of Cardinal Attilio Nicora. He heads a new internal committee tasked by the Pope with helping the Holy See comply with international banking regulations, aimed at combating international financial crime.

The letter suggests serious divisions of opinion inside the Vatican over how best to prevent it becoming a fiscal paradise, a tax haven for dodgy commercial operations run by nominees who have no right to hold accounts at the Institute for Works of Religion (IOR).

Whistleblowers criticised
During the 1980s the IOR – the formal name of the Vatican Bank – was at the centre of a major international financial scandal which resulted in a loss for the Vatican of $250m (£158m). Vatican Bank accounts are supposed to be held only by religious orders and members of the clergy.

The Vatican’s own daily newspaper Osservatore Romano wrote in a recent editorial that officials who revealed sensitive internal documents were “wolves” and that Pope Benedict was ready to stand up to their “irresponsible and undignified behaviour”.

The Pope’s spokesman, Fr Federico Lombardi, compared the leaks to America’s Wikileaks scandal and said they were intended to show the Vatican and its central government in a bad light.

The Pope himself appeared to refer to the poisonous atmosphere prevailing inside the frescoed halls of the Vatican this winter, when he told local Rome seminarians training to become priests: “There is a lot of talk about the Church, a lot of things being said. Let us hope there is also talk about our faith!”

A closed-door meeting of an internal Vatican watchdog finance committee this week formally expressed concern at the prevailing crisis, “which has not spared even the general economic system of the Vatican”.

While promising to “improve the administration of the goods and resources of the Holy See” the committee called upon the world’s 1.3 billion Catholic faithful to dig deeper into their pockets to continue funding the Vatican.