The Roman Catholic Church is taking no active roles in fundraising, staffing, advertising, or campaigning against marriage equality in Maine. 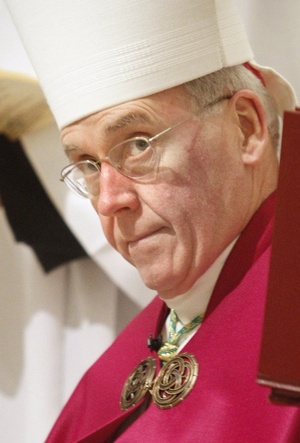 Bishop Richard Malone, the sect’s top-ranking official in Maine, said on 2 March that his goal now is only to re-train the wayward 25% of Maine’s 187,306 Catholics. He said that the church “doesn’t want to impose a law or belief on anyone,” especially non-Catholic citizens, who comprise 86% of Maine residents, and 77% of all Americans. Maine voters will decide by ballot in November whether to write same-gender marriage into state law.

Historically, Roman Catholic officials have opposed virtually every regulation, policy, and law proposed to protect LGBT people nationwide. Toward that end, the church spent $1.9 million to repeal Maine’s new marriage equality statute in 2009, after the legislature and governor had already enacted it.

Friday’s historic retreat is the first of its kind for this religious sect, and is profound. Such changes are not made independently, and are always coordinated with higher church officials. The Diocese of Maine, located in Portland, is a corporation sole which reports to the Ecclesiastical Province of Boston, located in Boston, Massachusetts, which includes the states of Maine, Massachusetts, New Hampshire, and Vermont.

The Catholic church’s reversal on this year’s campaign in Maine may help current marriage equality efforts in 18 other states, especially New Hampshire, New Jersey, North Carolina, Maryland, Minnesota, Rhode Island, and Washington. In Minnesota and North Carolina, the church has been lobbying to ban marriage for all same-gender couples by amending those states’ constitutions. Bishop Malone gave no indication of when, whether, or how Maine’s retreat on marriage equality will affect similar campaigns in other states.

Within its own ranks, however, Roman Catholic officials are continuing to reinforce Pope Benedict XVI’s formal view of bisexual, lesbian, and gay sexuality as “an intrinsic moral evil,” “intrinsically disordered,” and “inherently evil.”

Last month, the church assigned Rev. Kevin Martin of St. Michael Parish in Augusta to operate a newly formed Maine chapter of Courage, the international organization that claims to cure people of the sexual orientation that they are born with. The cures are attempted using a mixture of firm hope, additional prayer, new apparel, and/or life-long celibacy. Such reparative therapies have been discredited and denounced by every major mental/medical health professional organization as ineffective, painful, and dangerous to patients because of higher death rates from suicide.

Despite withdrawing from the public debate, the church still bans marriage for same-gender Catholic couples, according to its official policy (http://beautyofmarriage.org/) and Bishop Malone’s recent 22-page letter (http://bit.ly/zLbKsF).