I recommend that you read the entire article, but here are Richard Sipe’s conclusions.

Conclusion: The title of this volume—Sexual Abuse in the Catholic Church: A Decade of Crisis:—is actually a question. What has the Catholic Church learned? No one in June 2002 could possibly imagine the worldwide scope or dimensions that questions about abuse by Roman Catholic clergy would assume by 2012. The head of the U.S. Bishops’ Conference, Wilton Gregory, proclaimed triumphantly in 2004, “the problem is history.” 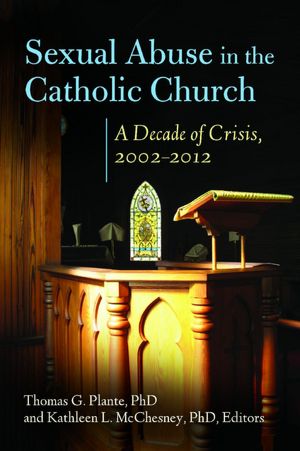 My reflections focused on five fundamental issues that impinge on the Catholic Church and underlie its processes of learning about and preventing clergy sex abuse: secrecy, scandal, crisis, mandated celibacy, and clerical culture.

Secrecy was and remains foundational to the operation of the Catholic clerical world. Reviewing several thousand legal procedures over the past ten years demonstrates to me how assiduously—and violently—American cardinals and bishops fight to keep incriminating and embarrassing documents secret.

Within a decade, the fulminating scandal fed by revelation upon revelation of Catholic bishops and priests abusing boys and girls and superiors covering up their crime spread like a string of Chinese fire crackers from Boston’s Back Bay to the Vatican and Pope, from Dallas to Dublin and Bishops Conferences around the world. Sex abuse by priests is no longer a secret, but a scandal properly so defined: a widely publicized allegation or set of allegations that damages the reputation of an institution, individual or creed. Clergy abuse of the vulnerable is the biggest scandal the Catholic Church in America has ever faced and most probably equals the Twelfth and Sixteenth Century scandals in Europe. For example: tapes recorded during an April 2010 meeting between a victim, his bishop abuser, and a cardinal (Danneels of Belgium) reveal the prelate urging the victim not to tell anyone that the bishop sexually abused him. The European press claimed the tapes provided some of the most damaging documents to emerge in the scandal rocking the Roman Catholic Church.

Again in 2010 another cardinal, Dario Castrillon Hoyos of Columbia, used the familial argument to defend keeping priest abuse secret saying, “it [reporting priest abusers to the police] would have been like testifying against a family member at trial.” He also claimed in a radio interview reported by the Associated Press “that Pope Benedict XVI, formerly Cardinal Joseph Ratzinger, was involved in a 2001 decision to praise a French bishop for shielding a priest who was convicted of raping minors.”

Not long after February 27, 2004 when the Report on the Crisis in the Catholic Church in the United States was published and made public along with the John Jay Report Illinois Supreme Court Justice Anne M. Burke who served as interim Chair of the National Review Board said that the bishops did not want change, but only “business as usual.” She spoke in 2010 about the problem of “untruth” she sees in the church and the bishops.

The scandal of sex abuse by Catholic clergy has been a public relations nightmare—gargantuan and impossible. No spin makes gruesome facts go away. Many priests and bishops have violated in criminal ways their responsibilities as representatives of Mother Church. Scandal, of course, is not the real problem no matter how distressing; the crisis of betrayal of Mother Church’s children is the crux of the scandal. However, the question remains: has the church learned anything about truth and transparency in the past decade?

There is wide based agreement that the Catholic Church is in a crisis mode. The crisis has to do with human sexuality—specifically bishops and priests who present themselves as celibate and chaste while they violate minors and the vulnerable under the cloak of their religion. The denial, rationalization, lies, and cover up of clerical crime by Church authority is in evidence and provides an ongoing scandal and crisis.

There are repeated calls for the abrogation of the requirement of celibacy for ordination to the priesthood. Whatever the merits of the arguments, they will not solve all the problems of clerical sexual malfeasance. Bishops and priests exist in, maintain, and assiduously preserve a clerical culture within which secret sexual activity by clergy is tolerated.

Celibacy and chastity are taught in an educational mode and structure established for diocesan clergy at the Council of Trent. That tradition is dependent on a monastic-like schedule (horarium) and a system of sacramental confession and spiritual directors. It is no longer effective. Despite rules and screening procedures a significant number of clerical candidates are sexually active with one another or with priests—sometimes faculty. Celibate observance of religious order clerics has not proved better. But sexual activity in the clerical culture is not introduced from the bottom-up—from candidates for ordination—but from men established in the culture—priests, spiritual directors, rectors, superiors, even bishops. Homosexuality is a predominant operational orientation in clerical culture form Rome to Los Angeles.[23]

Culture always trumps reason. Is it possible to revise clerical culture? History, theology and human nature all conspire in favor of reforming dysfunctional systems eventually. Theologically, clerical culture is mutable, no matter how firmly grounded in custom and tradition. Jesuit Bernard Lonergan (1967) wrestling with the possibility of “transition of organization and structural forms in the Church” said among other things: “there is in the historicity, which results from human nature, an exigence for changing form, structures, methods; and it is on this level and through this medium of changing meaning that divine revelation has entered the world and that the Church’s witness is given to it.”[24]

Literary critic, Lionel Trilling (1965) talks about the power of forces that change culture. Somewhere in the mind “there is a hard, irreducible, stubborn core of biological urgency, and biological necessity, and biological reason, that culture cannot reach and that reserves the right, which sooner or later it will exercise, to judge culture and resist and revise it.”[25] There is hope.

Prevention of sexual abuse by priests and bishops presents a daunting agenda. A revision of clerical culture is required to deal effectively with clergy sexual violations of every stripe. The burden transcends the capacities and limits of law and psychiatry and rests squarely on the very core of religion and spiritual transformation—in theologian Bernard Haering’s words on “absolute sincerity and transparency.” Prevention will not occur without discussion of the realities of sexuality, celibacy, and the development of explicit and honest norms for sexual responsibility and accountability for human behavior on every level of the church. The darkness of secrecy breeds betrayal, abuse and violent assault. Revelations over the last decade have proved that. A Mother Church, that sustains, nourishes and, protects her children demands light, accountability, openness and truth. That is the task unveiled over the past ten years. It is vital that the Church respond. Any church that cannot tell the truth about itself runs the risk of having nothing significant to be heard.