The Diocese of Stockton has settled a civil lawsuit and will pay $3.75 million to a plaintiff who accused removed priest Michael Kelly of sexually molesting him. 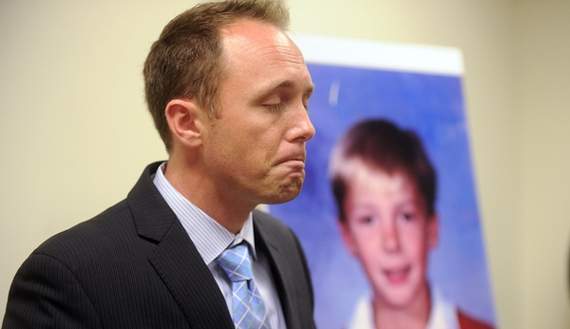 After obtaining one of the diocese’s largest-ever individual settlements for sexual abuse, the plaintiff named in court papers as John TZ Doe identified himself as Travis Trotter.

Trotter, of Fairfax, was an altar boy at Cathedral of the Annunciation in Stockton under Kelly’s direction more than 20 years ago. He said he recovered memories of the abuse years later and that the emotional fallout has prevented him from working as an airline pilot.

Trotter revealed his name to encourage other abuse victims to come forward and begin the healing process, he said.

“I wasn’t able to be strong as a child,” Trotter, 37, said Friday at University Plaza Waterfront Hotel in Stockton. “I finally took care of that little boy inside me.”

Trotter filed suit, his attorneys said, since the statue of limitations didn’t allow for a criminal trial.

Kelly, who had taken the stand once, departed to his native Ireland – citing health reasons – two days before he was scheduled to testify in the phase of the trial that focused on the diocese’s liability.

The diocese had to consider the jury’s verdict against Kelly and the priest’s departure in deciding whether to settle or continue arguing, said defense attorney Jim Goodman of San Francisco.

“We just felt it was in the best interest of everybody to bring the second phase of the trial to an end,” Bishop Stephen Blaire said, adding the settlement isn’t an admission of negligence on the diocese’s part.

“I don’t think a settlement in any way conveys anything other than an agreement, and I would hope people would not take it that way,” he said.

Jury members found Kelly liable after seven weeks of testimony. Because it was a civil trial, Trotter’s legal team did not have to prove beyond a reasonable doubt abuse had occurred; they had to prove it was more likely than not that the molestation and rape occurred.

“This case has always been (based) on no hard evidence,” said David Edwards, who served as jury foreman.

Edwards of Tracy said the jury looked at complaints by various parents at different parishes where Kelly served.

“For me there just was just too much inappropriate behavior by Father Kelly,” said Edwards, 47. “It was just too hard to dismiss.”

Jurors also considered that some church staff, who became mandatory reporters in 1998 by law, testified that had the complaints taken place at this time, versus 20 years ago, they would have reported the incidents to law enforcement for further investigation.

After the settlement was announced Friday, some of the jury embraced Trotter and his family.

Most headed to a news conference to learn more about Trotter.

Blaire said the diocese has clear procedures and policies for investigating allegations, including a review board made up of community members, law professionals and abuse survivors.

“If anybody wants to come in and examine the way we conduct our investigations, I welcome them to do that,” Blaire said.

Blaire said the diocese already has education and training programs for personnel and for youth.

“But I think this will be an opportunity to review all of that. If we need to make some improvements, we can do that.

“We’re always concerned about the impact of these kinds of situations on parishioners. What is most important to me is to reassure them that our No. 1 concern, our No. 1 priority, is the safety and the protection of our young people.”

Now, Blaire said, he must reach out to the people of St. Joachim’s Church in Lockeford, Kelly’s last parish, where he was highly supported.

The priest, who is presumed to be in Ireland, is still under investigation by the Calaveras County Sheriff’s Office for sexual abuse allegations from when he served at St. Andrew’s Catholic Church in San Andreas a decade ago.

Although the investigation was opened when a former altar boy reported being abused, it continues because investigators have identified additional alleged victims and need to conduct additional interviews, said Sgt. Chris Hewitt, a department spokesman.

“When we first learned of the accusations, it was reported to the Calaveras sheriff,” Blaire said. “That was several months ago. … We just have to wait and see what their investigation turns up.”

From the $3.75 million payout, $2 million will be paid by insurance, and the rest will come from the diocese’s reserves.

The diocese already has paid millions of dollars in settling past cases of sex abuse by priests.

It includes a $7 million payout to brothers John and James Howard, who said they were molested by now-defrocked Priest Oliver O’Grady while he served at Sacred Heart Church in Turlock. O’Grady was convicted and sentenced to 14 years in prison over the Howards’ abuse and was the focus of the documentary film “Deliver Us From Evil.” Overseen by then-Bishop Roger Mahony, the diocese was criticized for covering up O’Grady’s abuses.

Mahony, recently retired as archbishop of Los Angeles, in 2007 settled with more than 500 victims – for a total of $660 million – and publicly apologized for the abuses by priests.

But Blaire stood by Kelly.

“We defended him because we believed he was innocent,” Blaire said. “The jury made a decision, and I respect that decision.”