The long, typed letter fantasizes about a seventh-grader’s body, and asks if the boy wants to try various sex acts. 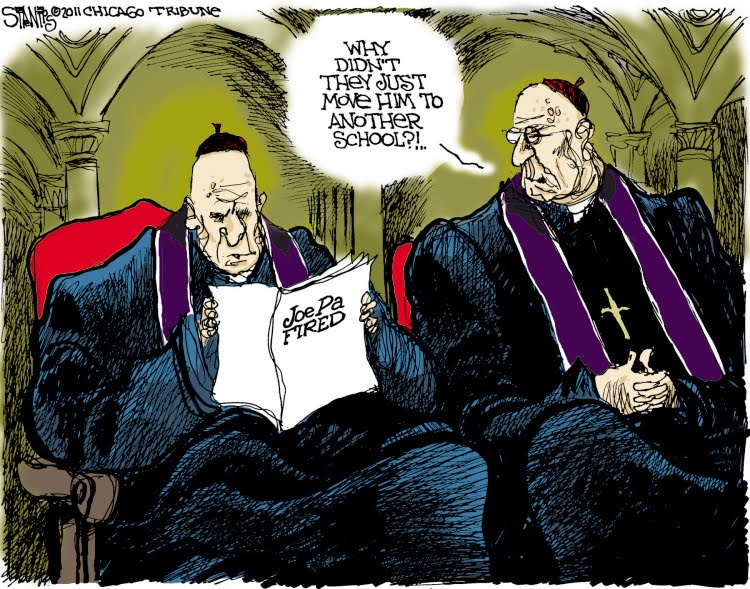 “You are soooo cute. I have been thinking about you for a long time. … You’re the cutest in our grade,” the author wrote in a rare G-rated line.

But the anonymous author was not a classmate at the boy’s Catholic school in northeast Philadelphia. It was a parish priest. One with a cache of gay pornography and sadomasochistic videos in the rectory.

Files show the letter-writing priest was sent to a church-run treatment center for priests, where staff concluded he did not have “a pathological interest in children or adults.” Doctors racked the letter up to a single fantasy. And they believed him when he said he hadn’t sent it — or acted out with children.

“Cardinal Bevilacqua is granting him a health leave, and that should be the announcement to the (St. Anselm’s) parish,” reads a December 1995 memo, found in secret personnel files at the Archdiocese of Philadelphia.

The memo, along with the priest’s letter, aired in court this week in a landmark criminal trial in Philadelphia. Accused is Monsignor William Lynn, the first U.S. church official charged with child endangerment for allegedly leaving predator-priests in ministry, and conspiring with others to cover up the festering problem.

Prosecutors call the archdiocese of 1.5 million Catholics “an unindicted co-conspirator.”

Defense lawyers counter that Lynn took orders from the archbishop during his 12-year run as secretary for clergy, when he supervised about 900 priests. Lynn, 61, faces years in prison if convicted.

By August 1996, the priest had been released, and reassigned to a far suburb. Lynn recommended that he return to full ministry, with no limits on his work with children. Cardinal Anthony Bevilacqua, who died this year, approved the plan, initializing Lynn’s memo with his ornate “AB.”

“That kind of information coming out through these trials, regardless of the verdict, is of enormous significance, for the church and also for our understanding of how sexual abuse was handled in institutions outside the church. … That includes schools and prisons and youth groups and sports teams,” said Timothy Lytton, an Albany Law School professor who wrote a book on the priest-abuse crisis.

The Catholic church is far from alone in protecting predators, he said, but its hierarchical nature gives authorities a long paper trail.

Philadelphia prosecutors have been investigating the archdiocese for 10 years, since the priest-abuse scandal exploded in Boston. Around the country, about 500 Roman Catholic priests have been convicted of child sex abuse, and dioceses have paid out more than $1 billion to victims.

Yet there’s never been a man in Lynn’s shoes.

When he took over the headquarters job in 1992, after serving as dean of the Philadelphia seminary, Lynn combed through the secret files. He drew up a list of 35 accused, still-active priests, and noted whether the accuser could still sue. In keeping with church protocol, he deemed priests ‘guilty’ only if they had admitted the account.

Lynn gave the list to Bevilacqua, but memos show the late cardinal had it shredded. A copy was nonetheless found in a safe at the archdiocese in 2006.

Lytton noted that church leaders like Bevilacqua and his contemporaries, including Cardinal Bernard Law and Los Angeles Cardinal Roger Mahoney, courageously fought for civil rights, immigrants and the underprivileged, yet somehow failed society’s most vulnerable.

“They were so focused on how to help the priests. In many cases, they lost sight of the children, and that’s partly because I don’t think they could appreciate the damage done to the children or the family structure. They’re not fathers. And they don’t have children,” Lytton said.

Phil Gaughan never told anyone what a priest allegedly did to him until he had a son of his own. Then he saw someone innocently hug his toddler. His grief erupted.

“That’s when I decided to tell,” Gaughan, 32, said Friday. He told his family their beloved priest had molested him throughout high school, when he worked weekends at their northeast Philadelphia church.

“Nobody would have believed it (then),” said Gaughan, who sued the archdiocese last year. “I couldn’t leave, or I’d lose my job. I was basically trapped in the back of the church with him.”

The Associated Press generally does not identify people alleging sexual abuse, but Gaughan wants his name used in hopes of helping sex-abuse victims.

He said he was molested from 1993 to 1997. Two brothers confronted the same priest with decades-old allegations in 1994. The priest wanted to apologize, but Lynn — and church therapists — advised against it on legal grounds, according to the 2005 grand jury report. At least three other men, including a Philadelphia policeman, filed other complaints before Gaughan called the archdiocese last year.

Gaughan, now a portrait photographer in Delaware, accepts that Lynn didn’t act alone. But he calls him “a big part” of the problem.

“There’s a responsibility that comes with that job title,” said Gaughan, who hopes to attend some of the trial. “It’s a step in the right direction.”