Catholic liberals in the United States are making much of an interesting juxtaposition in Vatican initiatives. This week the Holy See lashed out at American nuns for insufficient fidelity to church teachings while making encouraging sounds about welcoming back a right-wing breakaway movement called the Society of St. Pius X. 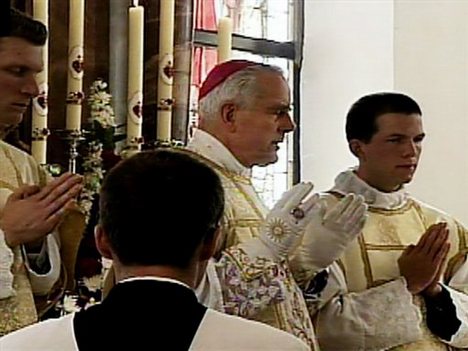 As one commenter on the National Catholic Reporter website put it: “The timing of it all is nothing less than stunning! Just as the CDF/Vatican is rewarding of group of right-wing anti-Semites for ‘bad’ behavior, it’s punishing U.S. women religious for their faithful devotion. Oh well, would you expect anything less from a group of paternalistic elderly men who thrive on secrecy & cunning?”

The CDF is the Congregation of the Doctrine of the Faith, the Vatican agency once headed by Cardinal Joseph Ratzinger. This week the congregation criticized the Leadership Conference of Women Religious for “protesting the Holy See’s actions regarding the question of women’s ordination and of a correct pastoral approach to ministry to homosexual persons.” It also faulted the umbrella group for not speaking out enough in opposition to abortion and same-sex marriage. The Vatican may also have noted that the Leadership Conference supported “Obamacare.”

The archbishop of Seattle has been assigned to oversee changes in the group, “in order to implement a process of review and conformity to the teachings and discipline of the church.”

Also this week, a Vatican spokesman called “encouraging” a communication from the SSPX, a schismatic ultra-traditionalist group formed by the late “rebel archbishop” Marcel Lefebvre. In 2009 Pope Benedict XVI lifted the excommunications of four bishops ordained by Lefebvre, including Richard Williamson, who has said the historical evidence is “hugely against” the deliberate gassing of 6 million Jews by the Nazis. (The Vatican said the pope wasn’t aware of Williamson’s views about the Holocaust when he lifted the bishop’s excommunication.)

You can ring any number of changes on these two developments and the reaction to them. One could argue that liberal Catholics, who are usually in favor of diversity and tolerance, aren’t very tolerant of traditionalist Catholics like SSPX. On the other hand, it’s somewhat disingenuous for traditionalist, Latin-Mass-loving Catholics to champion diversity in the church. If they had their druthers, every Mass would be in Latin.

What is most revealing about the two developments is the emphasis the Vatican places on issues related to sex, sexuality and reproduction. Opposition to abortion is now the defining issue for Catholicism internationally and in the United States. On that issue the SSPX is seen by Rome as more orthodox than liberal nuns who emphasize the social gospel and flirt with feminism. The SSPX also believes in an all-male priesthood. Those positions, it seems, cover a multitude of sins.