Beverly Bingle is on a mission impossible. 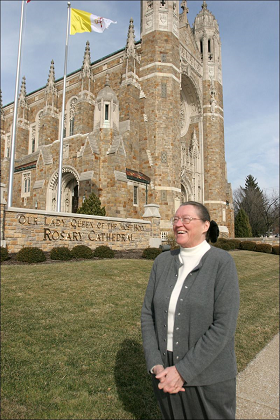 A “cradle Catholic” who retired from the Toledo Catholic Diocese after serving as a pastoral associate at Blessed Sacrament Parish, Ms. Bingle feels that God is calling her to be a priest — a Roman Catholic priest.

She knows the rules, of course, stated clearly and concisely in Canon Law 1024: “Only a baptized male validly receives sacred ordination.”

And she knows church tradition.

But the deeply spiritual Toledoan with a doctorate in ministry from Ecumenical Theological Seminary in Detroit has been unable to shake the feeling that God wants her to be a priest in the Roman Catholic Church, to which she has belonged for all of her 68 years.

A no-frills type who shuns makeup, Ms. Bingle lives in a scruffy part of North Toledo where she plants a huge garden in her backyard and gives the harvest away to anyone in need.

Her calling to the priesthood is something she has wrestled with for years, she said, but the feeling began to intensify about a year ago when she “stumbled across” a group called Roman Catholic Womenpriests.

Members consider the group a renewal movement that is fully and legitimately part of the Roman Catholic Church. Their motto is “a new model of ministry in a renewed church.”

Members and supporters of Roman Catholic Womenpriests believe Canon Law 1024 is in error, and like other unjust laws in history, including slavery, will be changed — eventually. But they refuse to sit idly by, awaiting what would be a seismic shift in church law and tradition.

Female priests serve their flocks in different settings, including hospitals and nursing homes, with many presiding at weekly liturgies in rented or donated Protestant spaces.

Ms. Bingle has applied and has been accepted into the organization’s priestly formation program and is on track to be ordained sometime in 2013.

Three other women in the Toledo area are studying for the Roman Catholic priesthood, according to Ms. Bingle, but they are not ready to go public. Two are likely to be “catacomb priests” who never go public, and a third now works for the Toledo Diocese and fears she could lose her job and retirement benefits if the church finds out, Ms. Bingle said.

Anyone who openly defies church law takes risk, including punishment from the church and harassment from traditional-minded Roman Catholics.

The Vatican has forbidden discussion of women’s ordination and has ruled that anyone who takes part in the ordination of female priests is automatically excommunicated by that action.

“The church has no authority whatsoever to confer priestly ordination on women and … this judgment is to be definitively held by all the church’s faithful,” Bishop Blair said in quoting the pope’s letter.

“The ordination of women is not possible, not because women are somehow unfit to carry out the functions of a priest, but because on the level of sacramental signs it is not the choice that the Lord has made.”

Pope John Paul’s 1994 letter effectively closed the debate on female priests because the Vatican’s Congregation for the Doctrine of the Faith deemed it to have “definitive” status.

Some theologians question the Vatican’s finding, however, saying the late pontiff’s letter would be more appropriately defined as “authoritative” — a critical distinction in the church world that would give the document less weight.

Female priests and their supporters say they are not concerned by threats or acts of excommunication, the Catholic Church’s harshest penalty that deprives a person of all participation in church society.

“They probably would excommunicate me already because I’m attempting to be ordained,” Ms. Bingle said. “But they can’t put you in jail anymore. And they can’t burn you at the stake.”

And in Ms. Bingle’s view, she would reject excommunication because she believes it is based on an unjust law.

“I would not consider myself excommunicated. In my opinion, my conscience tells me I am still a good practicing Catholic in good standing,” she said.

She said she considers them “badges of honor” because Pope Benedict XVI has canonized two excommunicated nuns, Mother Theodore Guerin and Mary MacKillop. “He is making excommunication the fast track to sainthood,” Bishop Meehan said in an interview.

Sydney Condray, 72, a Toledo author who has a doctorate in education administration, is weighing whether to seek ordination as a priest.

A widow, Ms. Condray said she feels “a call to a leadership role, and the priesthood is a call to leadership within a community.”

She believes Canon Law 1024 is “based on wrong assumptions; therefore their conclusions are wrong. I am not under any obligation to agree with things that make no sense to me. We have women who are leaders of countries, leaders of corporations, doctors, lawyers, and Indian chiefs.”

“It is an anachronism to require that only people of the male gender can be priests. Why, because they have exterior plumbing? Yes, Jesus was a man. But he was a man of Aramaic descent. Why not limit the priesthood to males of Aramaic descent? It can get that ridiculous,” Ms. Condray said.

The Rev. Roy Bourgeois, a Catholic priest from Louisiana who belongs to the Maryknoll Missionary order, is one of the only Roman Catholic priests in the United States who has publicly supported women’s ordination. He told The Blade in an interview that he feels he has no choice but to speak out because church law is wrong.

“In Catholicism, we all learn about the primacy of conscience. My conscience compelled me to break my silence on this issue, on this teaching,” Father Bourgeois said. “Silence is the voice of complicity. Now, when I broke my silence, I of course got in big trouble with the Vatican. However, I have refused to recant my belief in support of the ordination of women. I believe that our church teaching defies faith and reason and simply cannot stand up to scrutiny.”

Father Bourgeois got involved in a showdown with church authorities after he gave the homily at the ordination of Janice Sevre-Duszynska in Lexington, Ky., on Aug. 9, 2008. The priest has been threatened with dismissal and excommunication but as of this writing, Father Bourgeois remains a Roman Catholic priest in good standing.

Shortly after participating in Ms. Sevre-Duszynska’s ordination, “I received a very serious letter from the Vatican stating that I would be excommunicated automatically if I did not recant my support of women’s ordination as priests,” Father Bourgeois said. “I responded by saying that I cannot recant. Sexism, like racism, is a sin, and no matter how hard we may try to justify discrimination against women it is not the way of God but of men in their quest for power.”

He has not heard further from Rome, he said. His Maryknoll superiors, meanwhile, sent him two warning letters last year demanding that he recant, which he has refused to do. The order took a vote earlier this year to dismiss him, Father Bourgeois said, but the motion did not have enough votes to pass.

For Father Bourgeois, 73, a Roman Catholic priest for 40 years, the ban on women’s ordination is “a grave injustice.”

“The question I had to ask myself and my fellow priests is an all-important question that they refuse to answer, and it’s who are we, as men, to say that our call from God is authentic but your call as women is not. Who are we to reject God’s call of women to the priesthood?

“What I discovered after a lot of study and reflection is that the root of our church’s teaching is sexism. A grave injustice is being done against women and against God, who I believe without any doubt calls both men and women to the priesthood.”

Bishop Joan Houk of Pittsburgh, who heads the Great Waters Region of Roman Catholic Womenpriests, which includes Ohio, was a Roman pastoral director and pastoral associate in Kentucky, where for 5½ years she ran two Roman Catholic parishes that had no pastors.

“I preached. I did funerals that did not have Eucharistic liturgies. I took my turn doing hospital chaplaincy, but I was not able to use holy oils. I was not able to hear confessions or preside at Eucharist. I did a couple of baptisms, but I could not do weddings.”

Bishop Houk, a graduate of the University of Notre Dame with a master of divinity degree, said the ministry restrictions placed on her because of her gender became increasingly difficult to bear.

“It was extremely painful,” Bishop Houk, 71, said. “I never realized that it would be that painful. … I thought, ‘If I was ordained I could give them the sacraments.'”

In March, 2005, she was inspired to pursue ordination after hearing Bishop Patricia Fresen, a bishop and a native of South Africa, talk about apartheid.

“I had believed that someday the Catholic Church would ordain women,” Bishop Houk said. “I had been waiting, and then I saw that things were getting more rigid against any possibility of us getting ordained. And then I heard Patricia say that when you try everything and it doesn’t work, then sometimes what you have to do is break the law. It became very clear to me right then that that was something I needed to do. I needed to break the law.”

Roman Catholic Womenpriests reject several other Roman Catholic teachings. They allow priests to be married, and they ordain homosexuals, for example.

Several married men have been ordained in the movement.

“The only thing that matters is that they are called by God to the priesthood,” Bishop Houk said.

She is a Roman Catholic Womanpriest for a small community in the Pittsburgh area.

Bishop Meehan, 64, of Sarasota, Fla., was one of the first eight women ordained in the United States, in a July, 2006, ceremony on a boat at the confluence of three rivers in Pittsburgh. She was ordained a bishop three years later.

She grew up in Ireland in a devout Catholic family, where “faith was woven into everything you are, and everything you were about,” Bishop Meehan said. “It was part of your whole being.”

After years of struggling with a calling to the priesthood, she saw a door open when nine women were ordained Roman Catholic priests in 2002 in a ceremony on the Danube River. Among them was Dagmar Celeste, a former first lady of Ohio.

“We don’t have to wait for permission anymore, Bishop Meehan said. “We’re not putting up with second-class citizenship. We are refusing to sit in the back of the bus. We are taking our rightful role. We are not leaving the church. No, we are leading the church.”