Cardinal Anthony Bevilacqua died just weeks before his longtime aide went on trial in the alleged cover-up of sexual assaults by priests within the Roman Catholic Archdiocese of Philadelphia. 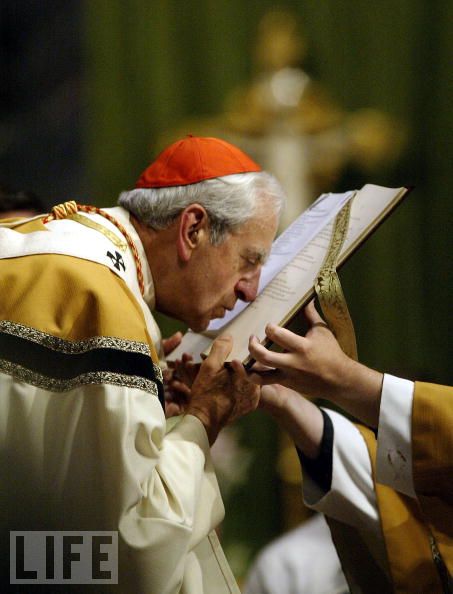 Yet Bevilacqua is very much the ghost inside courtroom 304 at the Philadelphia Criminal Justice Center. Rarely an hour goes by that his name is not invoked.

Witnesses portray him as a regal, sometimes feared authoritarian figure: “the man at the top,” in the words of city detective Joseph Walsh.

After eight weeks of evidence, prosecutors trying to convict Monsignor William Lynn of child endangerment rested Thursday without showing the videotaped deposition Bevilacqua gave two months before his Jan. 31 death. He was 88, and battling cancer and dementia. And he claimed to remember few details of the scores of abuse complaints that came in under his watch, according to a defense motion.

Yet since his death, prosecutors have learned the cardinal ordered two confidantes to destroy a 1994 list Lynn had prepared of 35 problem priests.

The list warned the cardinal they had three diagnosed pedophiles, a dozen confirmed predators and at least 20 more possible abusers in their midst.

Bevilacqua promptly had the list shredded, according to a memo signed by his loyal aides, current Bishop Joseph R. Cistone of Saginaw, Mich., and now-retired Bishop Edward Cullen of Allentown, Pa.

“It was all about the good of Mother Church,” Assistant District Attorney Patrick Blessington argued to the trial judge Thursday. “It’s not only criminal, it’s outrageously criminal.”

Lynn was the point person for abuse complaints in his role as secretary for clergy from 1992 to 2004. He had little training for the job.

“I thought I was dealing with them adequately,” Lynn told a grand jury in 2002, when prosecutors started investigating the archdiocese. “I didn’t get any direction.”

They have also heard from former altar boys, and men and women who worked in rectories growing up, who said they were raped or fondled for years.

Prosecutors call Lynn a key player in developing the archdiocese’s response to the complaints. Typically, that meant taking statements from the accused and accuser, typing up memos, and sometimes sending a priest for counseling before he was transferred to a new parish.

Lynn’s defense lawyers have at times called their client a mere “scrivener” who carried out Bevilacqua’s orders. And even prosecution witnesses agreed the cardinal ultimately decided priest assignments.

Jurors also heard what happened if a pastor refused to take one of the bad apples. Monsignor Michael Picard of Newtown testified that he was called down to meet with Bevilacqua about his “disobedience” in 1996. He spent 14 years “in the penalty box,” denied the title of monsignor.

The evidence paints Lynn, by comparison, as a company man, dutiful and compliant. He alone now faces more than 20 years in prison if convicted.

“I’m not a lawyer. I don’t know whether he broke the law. But he certainly did not do the honorable thing,” said the Rev. Thomas Reese, a senior fellow at the Woodstock Theological Center at Georgetown University. “He should have looked Bevilacqua in the eye and said, `You can’t do this. This is wrong, and I’m not going to be part of it.'”

The cardinal, trained in both canon and civil law, made 10 combative appearances before the grand jury in 2003 and 2004, accompanied by high-priced counsel. Prosecutors blasted Bevilacqua in their 2005 grand jury report, but said they couldn’t charge him because the statute of limitations had run out on the accusations.

A second grand jury last year complained there were still dozens of accused Philadelphia priests in ministry. Armed with new complaints and revised laws, prosecutors charged three priests and a teacher with sexually assaulting two boys in the 1990s. They charged Lynn with two counts each of child endangerment and conspiracy.

Common Pleas Judge M. Teresa Sarmina dropped one of the conspiracy charges when prosecutors rested, finding insufficient evidence Lynn had conspired with the Rev. James Brennan to keep him in ministry. Brennan is also on trial, charged with molesting a teenager in 1996. Defrocked priest Edward Avery pleaded guilty to a 1999 sexual assault, and is serving a 2 1/2- to five-year term.

The defense starts its case Tuesday, with Lynn’s former assistants and several character witnesses expected to testify. It’s not clear whether Lynn will take the stand.

The jury is expected to get the case in about two weeks – presumably, without ever hearing the sealed testimony of “the man at the top.”