PHILADELPHIA — After eight weeks of wrenching testimony, Philadelphia prosecutors rested their case Thursday in the trial of a Roman Catholic church official accused of helping bury complaints that priests were raping and molesting children. 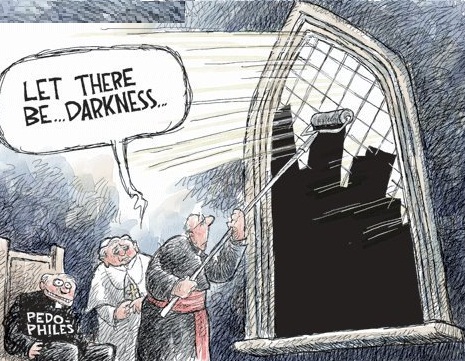 Monsignor William Lynn is the first U.S. church official charged for his handling of the abuse complaints. Prosecutors say the former secretary for clergy of the Archdiocese of Philadelphia helped known predators stay in ministry, and they charged him with child endangerment and conspiracy.

In arguing to send the case to the jury, a prosecutor said the church needed the priests to run the “business,” protecting church assets – and secrets – over the lives of children.

Defense lawyers counter that Lynn tried to address the problem as secretary for clergy from 1992 to 2004, but he took orders from above. For most of his tenure, he reported to Cardinal Anthony Bevilacqua.

Jurors have heard painful testimony from more than a dozen men and women who say they were abused. Former altar boys and others said they were molested or raped while working in the rectory, on overnight trips to the shore, and even in the church sacristy.

Common Pleas Judge M. Teresa Sarmina agreed with a defense motion Thursday to drop one of two conspiracy counts lodged against Lynn. But he still faces another conspiracy count and two counts of child endangerment.

“The wild card, obviously, is whether or not we decide to put Monsignor Lynn on the stand,” lawyer Thomas Bergstrom told Sarmina as he sketched out defense plans for next week.

The trial caps a 10-year investigation for Philadelphia prosecutors, who began their work after the priest sex-abuse crisis broke open in Boston in 2002. They produced an explosive 2005 grand jury report that named 63 Philadelphia priests as likely predators but bitterly concluded that no one could be charged because of legal time limits.

But they got a second chance when more recent accusations surfaced, and they charged Lynn last year after a second grand jury investigation. That report alleged that Lynn knew the accused priests had prior complaints in their files but allowed them to remain in jobs around children.

In a blow to the defense, Sarmina let prosecutors tell the jury about 20 other priests whose cases had crossed Lynn’s desk, to show a pattern of behavior.

As early as 1994, Lynn had prepared a list of about three dozen problem priests based on his review of the secret files, and he sent it to Bevilacqua. The list, shown to jurors, classified three as diagnosed pedophiles and 12 more as “guilty” of the abuse. Twenty were inconclusive, Lynn had said.

Many remained active priests in the archdiocese for years. And one led a South Philadelphia parish until March.

The list is the closest thing to a smoking gun in the case.

Prosecutors say it shows that Lynn knew all too well the church had dangerous predators in its midst. The defense says it shows the loyal aide trying to get Bevilacqua to address the festering problem.

Lynn told the grand jury about the list in 2002, but he said he couldn’t find it in his office.

Then a memo surfaced in February – just days after the former cardinal’s death – that shows Bevilacqua had ordered it shredded. A surviving copy of the list was found.

Prosecutors ended their case Thursday with a detective testifying about the list and its belated discovery.

Lynn is on trial with the Rev. James Brennan, one of four co-defendants charged last year. Former priest Edward Avery – deemed “guilty” on Lynn’s 1994 list and defrocked in 2006 – pleaded guilty before trial to sexually assaulting an altar boy in a church sacristy in 1999. He is serving a 2-1/2- to five-year prison term. The two others will be tried separately.

Brennan, 48, denies the charges, and his lawyer attacked the accuser’s credibility when he testified.