Why do some people who would recognize gay civil unions oppose gay marriage? Certain religious groups want to deny gays the sacredeness of what they take to be a sacrament. But marriage is no sacrament. 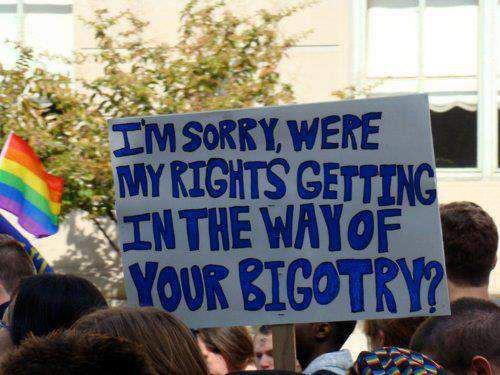 Some of my fellow Catholics even think that “true marriage” was instituted by Christ. It wasn’t. Marriage is prescribed in Eden by YHWH (Yahweh) at Genesis 2.24: man and wife shall “become one flesh.” When Jesus is asked about marriage, he simply quotes that passage from Genesis (Mark 10.8). He nowhere claims to be laying a new foundation for a “Christian marriage” to replace the Yahwist institution.

Some try to make the wedding at Cana (John 1.1-11) somehow sacramental because Jesus worked his first miracle there. But that was clearly a Jewish wedding, like any other Jesus might have attended, and the miracle, by its superabundance of wine, is meant to show the disciples that the Messianic time has come. The great Johannine scholar Father Raymond Brown emphasizes this, and concludes of the passage: “Neither the external nor the internal evidence for a symbolic reference to matrimony is strong. The wedding is only the backdrop and occasion for the story, and the joining of the man and woman does not have any direct role in the narrative.”

The early church had no specific rite for marriage. This was left up to the secular authorities of the Roman Empire, since marriage is a legal concern for the legitimacy of heirs. When the Empire became Christian under Constantine, Christian emperors continued the imperial control of marriage, as the Code of Justinian makes clear. When the Empire faltered in the West, church courts took up the role of legal adjudicator of valid marriages. But there was still no special religious meaning to the institution. As the best scholar of sacramental history, Joseph Martos, puts it: “Before the eleventh century there was no such thing as a Christian wedding ceremony in the Latin church, and throughout the Middle Ages there was no single church ritual for solemnizing marriage between Christians.”

Only in the twelfth century was a claim made for some supernatural favor (grace) bestowed on marriage as a sacrament. By the next century marriage had been added to the biblically sacred number of seven sacraments. Since Thomas Aquinas argued that the spouses’ consent is the efficient cause of marriage and the seal of intercourse was the final cause, it is hard to see what a priest’s blessing could add to the reality of the bond. And bad effects followed. This sacralizing of the natural reality led to a demoting of Yahwist marriage, the only kind Jesus recognized, as inferior to “true marriage” in a church.

In the 1930s, my parents had a civil marriage, but my Catholic mother did not think she was truly married if not by a priest. My non-Catholic father went along with a church wedding (but in the sacristy, not the sanctuary) by promising to raise his children as Catholic. My mother thought she had received the sacrament, but had she? Since mutual consent is the essence of marriage, one would think that the sacrament would have to be bestowed on both partners; but my non-Catholic father could not receive the sacrament. Later, when my father left and married another, my mother was told she could not remarry because she was still married to my father in the “true marriage.” When he returned to my mother, and became a Catholic, a priest performed again the sacramental marriage. Since my father’s intervening marriage was “outside the church,” it did not count. What nonsense.

Those who do not want to let gay partners have the sacredness of sacramental marriage are relying on a Scholastic fiction of the thirteenth century to play with people’s lives, as the church has done ever since the time of Aquinas. The myth of the sacrament should not let people deprive gays of the right to natural marriage, whether blessed by Yahweh or not. They surely do not need—since no one does—the blessing of Saint Thomas.