Just after dawn on Wednesday, May 23, Paolo Gabriele said goodbye to his wife, passed by the bedrooms of his three children and left to start another day in the service of the man Roman Catholics believe is the vicar of Christ on Earth. 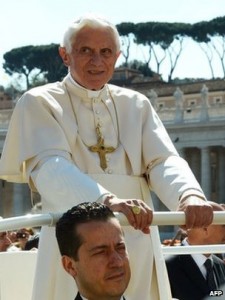 By the end of the day, Pope Benedict’s butler would be branded a traitor and some, including an Italian cardinal, would compare him to the most famous betrayer in history – Judas Iscariot, the man who turned Jesus over to the Romans.

With the St Ann’s Gate entrance, guarded by Swiss Guard in blue berets, to his back, he passed the Holy See’s central post office on Via Del Belvedere, turned left to climb a stone stairway named after Pope Pius X, and walked up a flight of covered steps to enter the small Renaissance-era Courtyard of Sixtus V.

Here he used a key held by fewer than 10 people to enter an elevator that leads directly to the pope’s private apartment on the third and top floor of the Apostolic Palace in the world’s smallest state. Even cardinals can’t use it.

Gabriele, said by those who know him to be a timid, reserved and shy man, is now at the centre of the worst crisis in Pope Benedict’s pontificate.

His face has appeared on the front pages of newspapers all over the world, accused of being the source of leaked documents alleging serious Vatican corruption and cronyism in a scandal that has shaken the very centre of the Church.

To some – even if he is found guilty – he is an idealist who wanted to root out corruption in the Vatican and was helped by outside accomplices. To others, he is merely a pawn in a much bigger power struggle among cardinals inside the Vatican walls.

“I know Paolo and I don’t think he is capable of doing something like this by himself,” a person who spoke on the condition of anonymity told Reuters.

“It is clearly a betrayal of the pope’s trust but I don’t think he could have acted alone,” that person said.

That Wednesday morning when Gabriele, dressed in a dark suit and white shirt, entered the private papal apartment, he walked down a corridor past the pope’s modern private chapel, with its stained glass ceiling and white leather kneelers.

Even as he was serving the pope his breakfast, after the pontiff had said mass with other members of the “papal family” that morning, Gabriele knew he was a suspect in an investigation into leaks that had begun in January.

“He was questioned earlier but the decisive elements that permitted the arrest surfaced later,” a Vatican official said, adding that one of the pope’s two private secretaries, Monsignor Georg Ganswein, had confronted Gabriele with his suspicions.

LAST RIDE IN THE POPEMOBILE

At precisely 10:30 that sunny Wednesday morning, Benedict rode in his white popemobile through the Arch of the Bells into St Peter’s Square to start his weekly audience. Gabriele was in his usual place, to the right of the driver, and his stony face showed no emotion.

It was the last ride he would take in the iconic vehicle that carries the man world diplomacy recognizes not only as leader of 1.2 billion Roman Catholics but as “The Sovereign of the State of Vatican City.”

That afternoon, agents led by Domenico Giani, 49, the shaven-headed Vatican police chief who is known by the diminutive “Mimmo” to his friends, rang the buzzer on the Gabriele family apartment and entered.

Giani was formerly a member of the Italian secret service.

“It’s not a fancy place – four rooms, a bath and a kitchen, if I remember correctly,” someone who has been inside told Reuters.

Inside, they found what the Vatican newspaper L’Osservatore Romano – which waited nearly a week before writing about the arrest – called “a large number of confidential documents” belonging to the pope.

“A sense of tension, disorientation, stupor and sadness fell over the whole place like a thick fog after news of Paolo’s arrest spread,” said one Vatican worker describing the mood of employees from priests to postmen in the following days.

Because the Vatican does not have a jail, Gabriele is being held in a simple “safe room” with a bed and small table in the Vatican police station.

But the question on many people’s minds and lips, including Gabriele’s friends, was “Why? What is the motive?”

If he is guilty, why would Paoletto (little Paul, as he known), a devout Catholic and devoted father, betray the man whose official titles include “Successor of the Prince of the Apostles” and “Servant of the Servants of God”?

People who know Gabriele, now called “the defendant” in Vatican statements, exclude money as a motive.

They say the butler, who still attends Mass each day in the police station, would not have been able to spend it anywhere without raising suspicion; unless he left his job and probably even Italy.

And why, at 46 with three small children, would he leave a simple but comfortable life in the Vatican? While Vatican employees do not receive large salaries, they do enjoy benefits such as low rent, no income tax and cheap food and petrol at the commissaries of the 108-acre city state.

Gianluigi Nuzzi, the Italian journalist who revealed many of the documents alleging corruption in the Vatican and internal conflict over the role of the Vatican bank, declines to reveal his sources but insists he did not pay anyone.

Nuzzi, a respected journalist with a good track record whose book “His Holiness: The Secret Papers of Benedict XVI,” contains some of the allegations, says his sources were simple, devout people “genuinely concerned about the Catholic Church” who wanted to expose corruption.

People who know Gabriele, who started out as a humble cleaning person in the Vatican, said there was no indication either that he could have been blackmailed over his private life to force him to leak the documents.

Apart from Gabriele, the few other people who could go directly into the papal apartments via the reserved private elevator at the base of the Sixtus V courtyard include the pope’s two priest secretaries, Ganswein and Maltese Monsignor Alfred Xuereb, and four consecrated women of “Memores Domini”.

Memores Domini is an association of lay women, similar to nuns, who take vows of poverty, chastity and obedience within the Catholic organization Communion and Liberation. Their names are Carmela, Loredana, Cristiana and Rossella.

The fact that Gabriele was part of a tightly knit group known as “the papal family” explains the sadness and bitterness in the pope’s words when he first spoke about the crisis in public on Wednesday, exactly one week after the butler’s arrest.

“Our life and our Christian path are often marked by difficulties, incomprehension and suffering,” he said, adding that all people must persevere in the face of “conflicts in human relations, often within one’s own family”.

While the pope’s secretaries and the four women who help him run the simple household live in the papal residence, Gabriele stayed in his own apartment nearby with his family.

“He lived in the Vatican but not in the papal apartment,” one Church official who knows Gabriele told Reuters. “He could have met with anyone in the Vatican or outside the Vatican”.

In an interview with Reuters, Nuzzi would not say if any of the documents he had received came from Gabriele.

His book contains a treasure trove of private Vatican correspondence, including documents alleging cronyism and corruption in contracts with Italian companies, conspiracies among cardinals and clashes over management at the Vatican’s own bank, the Institute for Works of Religion, or IOR.

He said the book, which hit the stands last week and is already sold out in Rome, is based on confidential conversations with more than 10 Vatican whistleblowers.

LOOKING FOR THE CROWS

The Vatican has not contested the authenticity of the documents but says their leak was part of a “brutal” personal attack on the pope and their publication “a criminal act”.

The Italian media have dubbed the people who have leaked the documents “Corvi” (crows), a pejorative Italian term for an informant.

“They are not crows, they are doves who wanted to shed light, clean their air,” Nuzzi told Reuters. “If the image of the Vatican that emerges is negative, it is not my fault, it is because of what is written in the documents.”

The leaks began in January when an investigative television show hosted by Nuzzi broadcast private letters to Secretary of State Cardinal Tarcisio Bertone and the pope from Archbishop Carlo Maria Vigano, former deputy governor of the Vatican City, who has been moved to Washington as the Vatican’s ambassador.

The letters showed Vigano was transferred after he exposed what he said was a web of corruption and cronyism linked to the awarding of contracts at inflated prices to Italian contractors.

Bertone responded by removing Vigano from his position three years before the end of his tenure and sending him to the United States, despite his strong resistance.

Bertone, whose job is to keep the Vatican’s central administration, or Curia, running smoothly for the pope, now looks weakened after the leaks scandal and other failures.

They include the abrupt departure last week of the Vatican bank’s Italian chief Ettore Gotti Tedeschi – who was recruited by Bertone from Spanish bank Santander – after a no-confidence vote by its board.

At his position in the papal apartments, Gabriele was in a prime position to see at least some of the disarray and tension in the Curia. But it remains to be seen whether he really was a pawn used by others to undermine Bertone, as some sources say.

After his arrest Gabriele called an old school friend and devout catholic, Carlo Fusco, and asked him to be his defense lawyer. Fusco, a civil advocate, called in criminal lawyer Cristiana Arru to help with Gabriele’s defense.

Gabriele’s fate is now in the hands of Piero Antonio Bonnet, the Vatican’s public prosecutor.

He will decide if the man who once was trusted with the keys to the papal elevator should stand trial for aggravated theft, or even worse, disclosing the documents of a head of state or breaking a special pontifical law protecting papal confidentiality.

The pope has tried to end talk of conflict under his roof.

Breaking his silence on the scandal on Wednesday, he expressed full confidence in his staff, including those who he said work “in silence” to help him carry out his ministry.

But that group no longer includes Gabriele, who only a few days ago was one of the closest men to Pope Benedict but now sits in a lonely room in the Vatican awaiting his fate.