In Philadelphia today, the jury in the Philadelphia abuse trial found Msgr. William Lynn guilty of child endangerment. Brian Roewe reports on this story at National Catholic Reporter. Jerry Slevin, a Harvard-trained lawyer who has closely followed this trial, has sent the following powerful statement about the verdict: 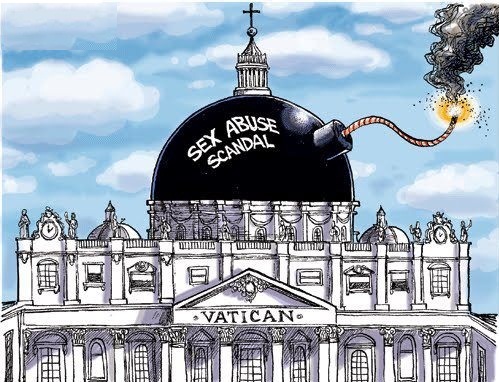 A Philly jury, that included several Catholics, has found a former top aide to two prominent Philly Catholic Cardinals guilty of endangering children who were sexually assaulted by predatory priests as described here and here.
The Cardinals’ aide, Monsignor Lynn, offered as his main defense that he was only following the Cardinals’ orders pursuant to the Philadelphia Catholic Archdiocese’s massive child abuse cover-up program that continued for decades until as late as last year at least.

The Cardinals had very close ties to the Vatican. One of them, Cardinal Rigali, worked closely with the current pope in Rome for over a decade and was St. Louis mentor for New York’s Cardinal Dolan, head of the American bishops.
The trial revealed in detail a cover-up program that appears to be standard operating procedure in the Catholic Church worldwide.

Will the pope now address this disgrace openly, honestly and effectively? He clearly has failed to do so in the past.

Several weeks ago U.S. bishops met and had the opportunity to revise their national child protection program to meet these challenges. The bishops, however, failed once again to do so, as U.S. bishops still are not fully accountable for protecting children in their care. The bishops merely continued the policies that a Philly jury has now found to have failed.
The Philly verdict also indicates that the Vatican’s current strategy is doomed to fail as noted here.

It is now quite clear that the Catholic hierarchy is either incapable or unwilling to protect American children, over 100,000 of whom have been sexually abused by predatory priests according to the Vatican’s own experts’ estimates at a recent Vatican conference. That number considerably exceeds the combined U.S. casualties and fatalities from the Iraq and Afghanistan wars. It also represents a number of abused that is equivalent to well over several thousand times all of Jerry Sandusky’s estimated victims.

Will Obama, Romney, Biden, Boehner, Reid, McConnell and Pelosi finally do their duty to protect American children and adopt effective national laws and enforcement policies to protect children from this national scourge?
Ireland is doing it. Why not the U.S. as well?

2 Replies to “Gerald T. Slevin: The Jury Has Spoken! Will the Pope Now Speak?”