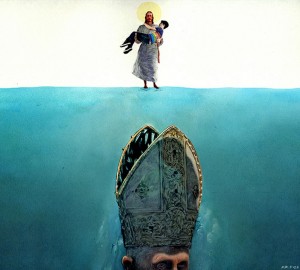 “Too many of my sisters and brothers in the gay community don’t seem to understand the power of religion,” White lamented. “They have been rejected by religion. They hate the idea of religion. Therefore, they’re not going to deal with religion, which is fatal, because religion is the heart of homophobia. Without religion there would be no homophobia. What other source of homophobia is there but six verses in the Bible? When Bible literalists preach that LGBT people are going to hell they become Christian terrorists. They use fear as their weapon, like all terrorists. They are seeking to deny our religious and civil rights. They threaten to turn our democracy into a fundamentalist theocracy. And if we don’t reverse the trend, there is the very real possibility that in the end we will all be governed according to their perverted version of biblical law.”

Gay activist and Christian pastor Mel White quoted in a post by Chris Hedges over at TruthDig titled, The War on Gays.